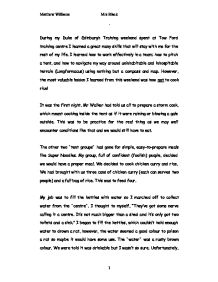 A meal to remember

A meal to remember During my Duke of Edinburgh Training weekend spent at Tow Ford training centre I learned a great many skills that will stay with me for the rest of my life. I learned how to work effectively in a team; how to pitch a tent, and how to navigate my way around uninhabitable and inhospitable terrain (Longformacus) using nothing but a compass and map. However, the most valuable lesson I learned from this weekend was how not to cook rice! It was the first night. Mr Walker had told us all to prepare a storm cook, which meant cooking inside the tent as if it were raining or blowing a gale outside. This was to be practice for the real thing as we may well encounter conditions like that and we would still have to eat. The other two `tent groups` had gone for simple, easy-to-prepare meals like Super Noodles. ...read more.

"The Rice!" shouted Frazer who quickly grabbed a spoon and began digging for dear life in the pot of rice. We all grabbed a spoon (little mini camping spoons) and began to dig and dig and dig our way out of the rice. We eventually managed to get the rice in the pot to an acceptable level while the pile of rice on the ground rose to an unacceptable level when the rice began to burn. It had consumed all the water and now it was just going to burn and stick to the pan. None of us had ever cooked rice before and were astounded at what had happened. I, for one, was wishing now that we had just stuck with Super Noodles. We hurriedly removed the rice from the stove hoping that it wasn't too badly burned. The curry was steaming by this time so I began to dish it up when Chris declared, "I don't want no curry!" ...read more.

However, when we bit into the chicken it tasted like rubber and we could have been there chewing it until the cows came home. Consequently, all the chicken pieces were then added to the pile of steaming rice already nestling in the ferns. Unsurprisingly we remained hungry that night dreaming of hot, steaming Super Noodles! I have not eaten chicken curry and rice since that weekend. It used to be my favourite dish. I always found it so easy to eat; I never realised just how difficult it is to cook. Cooking curry and rice should be left to the professionals (Mum). I often think about the poor ferns and wonder if they survived the trauma. I sometimes suffer pangs of guilt fearing that some unsuspecting animal has choked on a block of char-grilled rice. As I said before the most valuable lesson I learned was how not to cook rice. However, since that weekend I have developed a taste and a talent for cooking Supper Noodles. I don't think I'm the only one! Matthew Williams Mrs Black 1 ...read more.