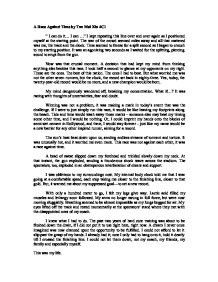 A Race Against Time by Tan Mei Xiu.

A Race Against Time by Tan Mei Xiu 4C1

“ I can do it… I can …” I kept repeating this line over and over again as I positioned myself at the starting point. The war of the crowd seemed miles away and all that mattered was me, the track and the clock. Time seemed to freeze for a split second as I began to crouch to my starting position. It was an agonizing two seconds as I waited for the splitting, piercing sound to erupt from the gun.

Now was that crucial moment. A decision that had kept my mind from thinking anything else besides this race. I took half a second to glance at my opponents on my right. These are the ones. The best of this nation. The ones I had to beat. But what worried me was not the other seven runners, but the clock, the record set back in eighty-three.

I was oblivious to my surroundings now. My internal body clock told me that I was going at a comfortable speed, each step taking me closer to the finishing line, closer to that gold. But, it warned me about my suppressed goal—to set a new record.

With only a hundred meter to go, I felt my legs give way. Lactic acid filled my muscles and lethargy soon followed. My arms no longer swung in full force, but were now moving sluggishly. Breathing seemed to be almost impossible as my lungs begged for air. My eyes lifted off the track and rested momentarily at the spectators’ stand where they met with the disappointed ones of my coach.

I knew what I had to do. The past two years of hard core training was about to be flushed down the drain, if I did not put it to use right here, right now. A dream I never once imagined was now chanced upon the opportunity to be fulfilled.

The last few meters of the race seemed never ending, and the finishing tape seemed to keep its distance from me. I knew I was ahead, the noises of the crowd cheered my name faithfully. Finally, I leapt at the tape. All my effort was over. It all became a blur, then dark as I collapsed onto the ground.

The next thing I knew was that I found myself lying in the shade, on a stretcher no doubt. In my cracked vision, I saw running figures heading toward me. Upon arrival, eloquence was delivered, sending limitless sprouts of joy through me. I had done it!!