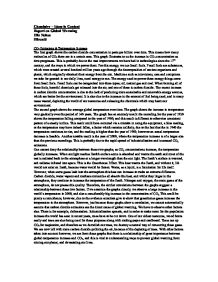 A report on Climate Change

Chemistry - Ideas in Context Report on Global Warming Ella Nokes 9Bront� CO2 Emissions & Temperature Increase The first graph shows the carbon dioxide concentration in parts per billion over time. This means how many molecules of CO2 there are in a certain area. This graph illustrates to us the increase in CO2 concentration as time progresses. This is probably due to the vast improvements we have had in technologies since the 17th century, and the ways in which we power them. For this energy, we use fossil fuels. Fossil fuels are substances, which were created several hundred million years ago through the decomposition of ancient organisms and plants, which originally obtained their energy from the sun. Machines such as televisions, cars and computers we take for granted in our daily lives, need energy to run. The energy used to power these energy things come from fossil fuels. Fossil fuels can be categorized into three types; oil, natural gas and coal. When burning all of these fuels, harmful chemicals get released into the air, and one of these is carbon dioxide. The recent increase in carbon dioxide concentration is due to the lack of producing more sustainable and renewable energy sources, which are better for the environment. ...read more.

Trees use up CO2 for respiration, and therefore as we demolish our trees, we destroy a natural way of consuming these gases. We are now left with more carbon dioxide polluting the air, because of the depleting of trees. With other factors taken into account however, we see from these graphs that there is a relationship of great importance between global temperature increase and CO2, and this is vital to understanding ways to prevent global warming from ruining our planet, and devastating our lives. A report to the Prime Minister Global warming is a very debatable subject. There are many reasons for why it is happening, and many vague solutions on how we can stop it happening. However, nobody can deny that it is happening and since scientists concluded that it was very likely that as a human race were having some cause towards it we have to act fast. The greenhouse effect is a natural phenomenon cause by radiation of the atmosphere. Heat from the sun passes through the atmosphere, warming it up, and most of it warms the surface of the planet. As the Earth warms up, it emits heat in the form of infra-red radiation - much like a hot pan emits heat even after it's taken away from the cooker. ...read more.

One of their theories is that the clouds are thinning, which is leading to more direct sunlight reaching the oceans which are contributing to global warming. They find that as the oceans are becoming warmer the clouds above them are dissipating allowing more sunlight to reach the oceans and warming them even further. However what this theory doesn't cover is that why the oceans are warming in the first place and this is probably due to the greenhouse effect, and the dissipation of clouds is possibly merely and effect of global warming rather than a cause for it. Another reason why this theory decreases in confidence is that it is difficult to find long term trends in the pattern of the dissipation of clouds, and therefore cannot be classified as a consistent theory. In Conclusion Overall, I believe that the contributions to global warming made by CO2 emissions and the greenhouse effect are the most prominent and destructive of them all. The other theories mentioned are valid however the evidence provided for the greenhouse effect and the increased emissions play a more important part in the Earth's temperature increase. I also believe that humans are actively causing global warming, and the world can be saved if we act fast and decrease our carbon footprint. It is our world and we must protect, or otherwise it may just be too late. ...read more.