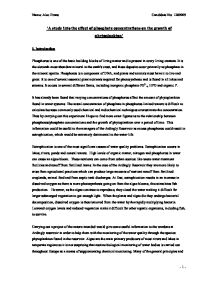 'A study into the effect of phosphate concentrations on the growth of phytoplankton'.

'A study into the effect of phosphate concentrations on the growth of phytoplankton' 1. Introduction Phosphorus is one of the basic building blocks of living matter and is present in every living creature. It is the eleventh-most abundant mineral in the earth's crust, and these deposits occur primarily as phosphate in the mineral apatite. Phosphorus is a component of DNA, and plants and animals must have it to live and grow. It is one of several essential plant nutrients required for photosynthesis and is found in all lakes and streams. It occurs in several different forms, including inorganic phosphate PO3-4, HPO and organic P. It has already been found that varying concentrations of phosphorus affect the amount of phytoplankton found in water systems. The actual concentration of phosphate in phosphorus-limited waters is difficult to calculate because commonly used chemical and radiochemical techniques overestimate the concentration. Thus by carrying out this experiment I hope to find more exact figures as to the relationship between phosphorus/phosphate concentrations and the growth of phytoplankton over a period of time. This information could be useful to the managers of the Ardingly Reservoir as excess phosphorus could result in eutrophication, which would be extremely detrimental to the water-life. Eutrophication is one of the most significant causes of water quality problems. Eutrophication occurs in lakes, rivers, ponds and coastal waters. High levels of organic matter, nitrogen and phosphorus in water can cause an algae bloom. These nutrients can come from urban sources like waste water treatment facilities and runoff from fertilized lawns. In the case of the Ardingly Reservoir they are more likely to arise from agricultural practices which can produce large amounts of nutrient runoff from fertilized croplands, animal feed and from septic tank discharges. At first, eutrophication results in an increase in dissolved oxygen as there is more photosynthesis going on from the algae blooms, this stimulates fish production. ...read more.

However as this was only a preliminary experiment I did not carry out a numerical comparison. It was possible to tell from simply looking at the solutions whether there were significant differences between the populations of phytoplankton in the different solutions. The results from this experiment were satisfactory and therefore it was decided to use the same concentrations of phosphate used in the preliminary experiment for the main investigation. The preliminary experiment also helped me improve my technique as I had not had any previous experience in the culturing of phytoplankton. Thus it served as a practice run for the main investigation as well as a method of acquiring a better knowledge of the relationship between phosphate concentration and its ability to inhibit the growth of phytoplankton. 5. Results Before the flasks were left to incubate for the period of seven days, 2cm3 of each solution was taken up and the turbidity, (light absorption) of each was measured. There was only a variation of 0.01 arbitrary units for all the results and so these were not placed in the table, the average light absorption was 0.10 arbitrary units. It was found that the phytoplankton grown in a concentration of 100ppm of phosphate showed a dramatic increase in population size as compared to that of the phytoplankton in the culture containing no phosphate. It was also noted that although there was no phosphate in the 0ppm phosphate flasks there was still some light absorption. 5.1. A table to show how the concentration of phosphate affects the rate of growth of phytoplankton Conc. of Phosphate Light Absorption (arbitrary units) 1 2 3 Average 100 1.35 1.4 1.36 1.46 1.45 1.43 1.25 1.33 1.26 1.37 10 0.54 0.53 0.53 0.62 0.62 0.62 0.51 0.53 0.53 0.56 1 0.12 0.1 0.09 0.25 0.26 0.27 0.3 0.3 0.29 0.22 0 0.12 0.12 0.1 0.08 0.08 0.07 0.15 0.16 0.15 0.11 5.2. ...read more.

It might have also been beneficial to have carried the experiment on for a longer period of time; this might have given more definite results as to the effect of the various phosphate concentrations on the phytoplankton. This is because, although after seven days there were differences between the populations in the different phosphate concentrations, a longer incubation period would have made these results more significant. Using a larger variance of phosphate concentrations as well as using more concentrations, i.e. 1; 10; 20; 30ppm might have produced a better set of results, enabling me to come to a more definite set of conclusions. If there had been more time it might have also helped to investigate the effect of phosphate concentration on different species of micro algae. Comparing these would give more reliable results as to the general behaviour of phytoplankton in different environments. I feel that using the turbidity of the solutions as a method for comparing, was not really as accurate as would have been desired. Although it did give very definite results the turbidity of the solutions would not only have been affected by the phytoplankton in the solutions, the nutrients added could also have had an effect on the results thus adding some uncertainty to them. I also feel that only gathering results once at the end of the experiment was not a very good way of getting results. There are some other tests that could have helped to give more information on the growth rates of the micro algae; these include testing dissolved oxygen levels in the solutions, testing amounts of phosphate present in the solutions, and counting numbers of algae under a microscope. Although the former two would involve inserting probes into the solutions which might result in contamination the latter could be done using an inverted microscope which would not involve removing any of the solution from the flask. Although using the colorimeter gave suitable results, if a method of counting exact populations of phytoplankton within a certain volume of water had been used as well I could have attained more accurate results. 9. ...read more.