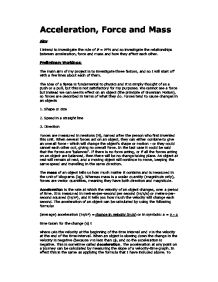 The main aim of my project is to investigate three factors, and so I will start off with a few lines about each of them.

The idea of a force is fundamental to physics and it is simply thought of as a push or a pull, but this is not satisfactory for my purposes. We cannot see a force but instead we can see its effect on an object (the principle of Brownian Motion), so forces are described in terms of what they do. Forces tend to cause changes in an objects

2. Speed in a straight line

Forces are measured in newtons (N), named after the person who first invented this unit. When several forces act on an object, they can either combine to give an overall force - which will change the object's shape or motion - or they could cancel each other out, giving no overall force. In the last case it could be said that the forces are 'balanced'. If there is no force acting, or if all the forces acting on an object are balanced, then there will be no change taking place. An object at rest will remain at rest, and a moving object will continue to move, keeping the same speed and travelling in the same direction.

The mass of an object tells us how much matter it contains and is measured in the unit of kilograms (kg). Whereas mass is a scalar quantity (magnitude only), forces are vector quantities, meaning they have both direction and magnitude.

A fair test must be ensured at all times, in any experiment, to keep the results as accurate as possible so that appropriate conclusions can be drawn. The main way that I hope to achieve this is by repeating each of my results a further two times so that an average can be taken and any anomalous results can be spotted before they are taken as genuine ones. As well as this I must consider how accurate I want my results to be. As seen above I think that giving my results to 3 decimal places would be appropriate as this allows good continuity and does not suffer from premature approximation. Another point that I will uphold is to use the same pieces of equipment for every different interval. Should the experiments take more than one lesson then I will mark each individual piece so I can recognise it at a later date. Another point is the set-up must be the same for both experiments, if this does not happen then I would not expect very accurate results at all. To make sure that my results are accurate I will only change one factor at a time. In fact there is only one factor that will be changed during the whole experiment.

friction into account. The way in which I would suggest to overcome this would be to use an air track (picture included). Instead of using the ticker-timer (over a period of 20 dots) to measure the acceleration, a series of light gates would be used in the same way. This would completely rid the experiment of friction though due to it being an air track there would still be some resistance from air molecules. Though this method, if one does not already own an air track, would be an expensive method. Therefore another method that could be used would be to make the beginning of the course elevated from the finish. This could be done using a beam that is propped up at the start end with item such as textbooks or a car jack. The right would be that which compensates exactly for the friction in the experiment.

The main aim of my experiment was to basically prove the theory of F = ma. The bottom line is that I could not prove the proportionality of Force and

acceleration, and my graph did not prove this as the line, although straight did not pass through the origin. I hope that my reasoning for this is correct and if it then I would brand my whole experiment a success. On the other hand I would like to do the experiment again and implicate some of the changes that I have suggested, and I know that the school does own an air track so the results would be a lot more accurate.

The next experiment that I would put into action would be either of the ideas that I have suggested in the last section so that my overall results would be closer to those that I had expected. Also I would keep the force acting on the trolley constant but change the mass of the trolley each time to further investigate the formula of F = ma.