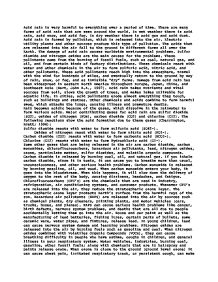 Acid rain is very harmful to everything over a period of time. There are many forms of acid rain that are seen around the world. In wet weather there is acid rain, acid snow, and acid fog. In dry weather there is acid gas and acid dust. Acid rain is formed by pollution, which is released into the air. Electric utility plants and other sources produce this type of pollution. The acids that are released into the air fall to the ground in different forms all over the Earth. The damage of acid rain causes worldwide environmental problems. Sulfur dioxide and nitrogen oxides are the main causes for the problems. These pollutants come from the burning of fossil fuels, such as coal, natural gas, and oil, and from certain kinds of factory distributions. These chemicals react with water and other chemicals in the air to form sulfuric acid, nitric acid, and other pollutants. These acid pollutants reach high into the atmosphere, travel with the wind for hundreds of miles, and eventually return to the ground by way of rain, snow, or fog, and as invisible "dry" forms. Damage from acid rain has been widespread in eastern North America throughout Europe, Japan, China, and Southeast Asia (Hart, John B.A., 1997). ...read more.

When PMs mix with air particles and get breathed in, they get stuck in the lung tissue. There they can cause increased respiratory disease and lung damage. Sulfur dioxides are released by burning coal, paper production, and melting metal. Sulfur dioxide can harm vegetation, harm metals, and cause lung problems, which include breathing problems and permanent lung damage. Volatile organic compounds (VOCs) are released into the air by burning gasoline, wood, coal, or natural gas, solvents, paints, glues, and other products that are used at work or home. There are a lot of similarities in all of these pollutants; most of these pollutants are from automobiles. Automobiles release harmful smoke into the air, which causes acid rain. In Canada, industrial activities, including oil refining and metal smelting, account for 61 percent of sulfur dioxide pollution. In the United States, 70 percent of sulfur dioxide pollution comes from power plants especially those that burn coal. Coal, oil, and gasoline are also some of the most common causes of all the pollutants. Acid rain effects almost everything and anything over a period of time. It reacts chemically with any object it comes in contact with. It effects sea life, forests, air, us and our health, and also nonliving things. On sea life, acid rain damages all the plants and animals living inside a body of water. ...read more.

Another way that a lot of our pollution is caused is by creating electrical energy. When electricity is created, fuels are usually burned, and this causes the pollution, which causes acid rain. The generation of electric power produces more pollution than any other industry in the United States. If people reduce the amount of these things that they release into the air, then there will be fewer pollutants. In our home we can run the dishwasher and washing machine with a full load, turn off lights, turn off hot water tank, turn down the heat at night, don't use the air conditioner as much, install fluorescent light bulbs, reduce, reuse, and recycle. In the yard, keep the pool cover on the pool when it is not in use. When going to work, you could walk, ride your bike, take a bus, or car pool; and try to use ethanol or propane gas. As the World's population we should take care of our environment. Some of the things that are being hurt are mostly due to our inconsiderate and selfish actions. People can help stop acid rain by not polluting the air. We want this land to stay clean and fresh as if we just settled here back when this land was first discovered. All people should take into consideration others and our next generations. We don't want this land to be poor and unhealthy for our kids and their kids. ...read more.