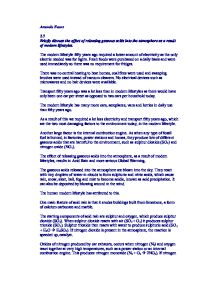 The starting components of acid rain are sulphur and oxygen, which produce sulphur dioxide (SO2). When sulphur dioxide reacts with air (SO2 + O2) it produces sulphur trioxide (SO3). Sulphur trioxide then reacts with water to produce sulphuric acid (SO3 + H2O --> H2SO4). If nitrogen dioxide is present in the atmosphere, the reaction is speeded up, catalyst. Oxides of nitrogen produced by car exhausts, occurs when nitrogen (N2) and oxygen react together at very high temperatures, such as a power station or an internal combustion engine. This produces nitrogen monoxide (N2 + O2 --> 2NO2). If nitrogen monoxide reacts with air it produces nitrogen dioxide (2NO + O2 --> 2NO2). When nitrogen dioxide reacts with water, nitric acid is produced (NO2 + H2O --> 2HNO3). Acid rain has serious effects on living organisms such as humans through poor air quality. Sulphur dioxide and nitrous oxides create breathing problems such as asthma and coughs. ...read more.

Acid Rain Forming Emissions Fall Sharply, EPA Reports: "(11/16/07) For the first time ever, sulphur dioxide (SO2) emissions from the power sector fell below 10 million tons as reported by the U.S. Environmental Protection Agency's Acid Rain Program and Related Programs 2006 Progress Report. 2006 marks the 12th year of what is widely hailed as one of the most successful environmental programs in U.S. history." (Yosemite 16/11/07) "In 2006, annual SO2 emissions from acid rain program electric power generation sources fell sharply, with reductions of 830,000 tons from 2005 levels and an overall reduction of 40 percent from 1990 levels. NOx emissions were down by over 3 million tons since 1990 and had decreased to nearly half the level anticipated without the Acid Rain Program. These reductions have led to a significant decrease in acid deposition, resulting in improved water quality in U.S. lakes and streams. Reduced formation of fine particles, improved air quality and human health related benefits are all results from the reduction of these emissions. ...read more.