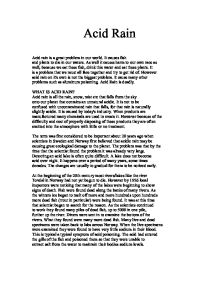 Acid Rain Acid rain is a great problem in our world. It causes fish and plants to die in our waters. As well it causes harm to our own race as well, because we eat these fish, drink this water and eat these plants. It is a problem that we must all face together and try to get rid of. However acid rain on it's own is not the biggest problem. It cause many other problems such as aluminum poisoning. Acid Rain is deadly. WHAT IS ACID RAIN? Acid rain is all the rain, snow, mist etc that falls from the sky onto our planet that contains an unnatural acidic. It is not to be confused with uncontaminated rain that falls, for that rain is naturally slightly acidic. It is caused by today's industry. When products are manufactured many chemicals are used to create it. However because of the difficulty and cost of properly disposing of these products they are often emitted into the atmosphere with little or no treatment. The term was first considered to be important about 20 years ago when scientists in Sweden and Norway first believed that acidic rain may be causing great ecological damage to the planet. The problem was that by the time that the scientist found the problem it was already very large. Detecting an acid lake is often quite difficult. A lake does not become acid over night. ...read more.

Soon the lake dies. By the late 1970s many Norwegian scientists began to suspect that it was not only the acid in the water that was causing the deaths. They had proved that most fish could survive in a stream that had up to a 1 unit difference in PH. After many experiments and research they found that their missing link was aluminum. Aluminum is one of the most common metals on earth. It is stored in a combined form with other elements in the earth. When it is combined it cannot dissolve into the water and harm the fish and plants. However the acid from acid rain can easily dissolve the bond between these elements. The Aluminum is then dissolved into a more soluble state by the acid. Other metals such as Copper (Cu), iron (Fe) etc can cause such effects upon the fish as well however it is the aluminum that is the most common. For example: CuO + H2SO4 ----------> CuSO4 + H2O In this form it is easily absorbed into the water. When it comes in contact with fish it causes irritation to the gills. In response the fish creates a film of mucus in the gills to stop this irritation until the irritant is gone. However the aluminum does not go always and the fish continues to build up more and more mucus to counteract it. Eventually there is so much mucus that it clogs the gills. ...read more.

Sulfuric acid is composed of two parts, know as ions. The hydrogen ion is what make a substance acid. The other ion is sulphate. When there are more hydrogen ions then a substance is acid. It is this sulphate ion that we are interested in. When the rain causes rivers to overboard onto the banks the river water passes through the soil. Since the industrial revolution in britain there has been an increasing amount of sulphur in the soil. In the river there is not enough sulphur for the acid to react in great quantities. However in the soil there is a great collection of sulphur to aid the reaction. When it joins the water the pH becomes much lower. This is the most deadly effect of acid rain on our water!!! The water itself does not contain enough sulphur to kill off it's population of fish and plants. But with the sulphur in the soil it does. CONCLUSION: Acid rain is a big problem. It causes the death of our lakes, our rivers, our wild life and most importantly us. As well it causes other problems that are very serious as well such as the release of aluminium and lead into our water supplies. We are suffering because of it. In Scotland there are many birth defects being attributed to it. We must cut down the releases of chemicals that cause it. But it will take time, even if we were to stop today we would have the problem for years to come because of the build up in the soil. Let's hope we can do something. ...read more.