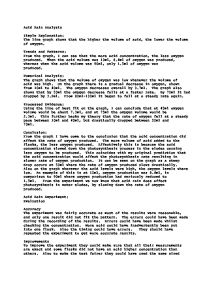 This coincides with my original prediction that the acid concentration would affect the photosynthesis rate resulting in slower rate of oxygen production. It can be seen on the graph as a steep drop occurs at 50ml where the rate of oxygen produced slows drastically. Also on the graph wherever the acid levels were high, the oxygen levels where low. An example of this is at 10ml, oxygen production was 8.4ml, in comparison to 90ml where oxygen production had seriously reduced to 1.5ml. From the experiment we now know that acid rain does affect photosynthesis in water elodea, by slowing down the rate of oxygen produced. Acid Rain Experiment: Evaluation Accuracy The experiment was fairly accurate as most of the results were reasonable, and only one result did not fit the pattern. ...read more.

Anomalous Results From the graph it is noticeable that there was one reading which didn't fit the pattern. At 20ml the oxygen production was 8.2ml, but this had risen by 0.1ml to 8.3ml at 30ml. This doesn't fit the pattern as the other results fell steadily instead of falling, rising, and increasing again. This may have occurred because slightly less acid was added to the 3rd flask, so the rate of oxygen produced rose slightly. Further Work To provide more evidence they could use another water plant to see if the acid concentration affected different plants and maybe find out if certain plants have built up a resistance to the acid. They would have to use the plants from the same lake as the elodea to make the test fairer. ...read more.