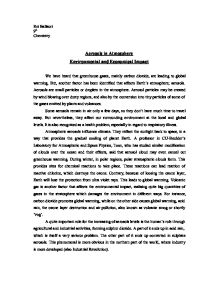 Eni Ballauri 9A Chemistry Aerosols in Atmosphere Environmental and Economical Impact We have heard that greenhouse gases, mainly carbon dioxide, are leading to global warming. But, another factor has been identified that affects Earth's atmosphere; aerosols. Aerosols are small particles or droplets in the atmosphere. Aerosol particles may be created by wind blowing over dusty regions, and also by the conversion into tiny particles of some of the gases emitted by plants and volcanoes. Some aerosols remain in air only a few days, so they don't have much time to travel away. But nevertheless, they affect our surrounding environment at the local and global levels. It is also recognised as a health problem, especially in regard to respiratory illness. ...read more.

A quite important role for the increasing of aerosols levels is the human's role through agricultural and industrial activities, forming sulphur dioxide. A part of it ends up in acid rain, which is itself a very serious problem. The other part of it ends up converted in sulphate aerosols. This phenomenal is more obvious in the northern part of the world, where industry is more developed (also Industrial Revolution). Another type of aerosols that affects climate is desert dust. Pictures from satellites demonstrate dust veils streaming out to the Atlantic Ocean from the deserts of North Africa. Similar things also happened in America and Asia. The dust particles absorb the sunlight as well as scatter it. Through absorption of sunlight, the dust particles warm the layer of the atmosphere where they reside. ...read more.

Forests are being destroyed by fire and snow in Alps is melting causing disasters by flowing cities. In year 2003, nearly 10% of snow in Alps has been lost due to melting because of global warming. Also, global warming may cause different allergic reactions and skin diseases, such as cancer, a very common one as a result of ultra violet rays. This is another reduce for the economy of the country, because new medicines and treatments have to be searched, found and proved. Furthermore, aerosols can also affect the agriculture, because certain sustenance (vegetables, fruits, crops etc.) need special season and climate to be cultivated in a healthy way. All in all I could say that all these facts should be an opportunity for people to reflect for their present and future. Many aerosols are natural, but we should try to find ways to reduce the air industrial waste, which is mainly caused by humans. ...read more.

#1# The student has answered the question well with care taken to answer both sides of the question, but I do feel that more time could had been taken to address the economical side of the argument. When given a ...

#1# The student has answered the question well with care taken to answer both sides of the question, but I do feel that more time could had been taken to address the economical side of the argument. When given a question it is important to ensure that you answer every part of the question.

#2# I feel that more research could be done so that claims could be substantiated with evidence. When you make a statement it is always important that if you can that you back it up with evidence as it gives the claims you are making more credit. The level of scientific language is appropriate for this level of study. The concluding paragraph could had been better with more of a round up of all the points made in the essay.

#3# The language used could had been more scientific as in places it felt too conversational. Being informal in your writing style can in some places be an advantage but when writing a report it is better to keep the language formal and scientific. The fact that resources have been referenced is a higher level skill and shows an understanding of how scientific reports are meant to be written.