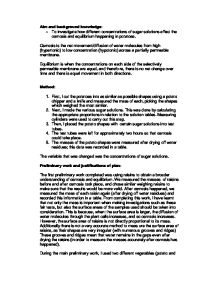 Aim and background knowledge: - To investigate how different concentrations of sugar solutions affect the osmosis and equilibrium happening in potatoes.

−        To investigate how different concentrations of sugar solutions affect the osmosis and equilibrium happening in potatoes.

Osmosis is the net movement/diffusion of water molecules from high (hypertonic) to low concentration (hypotonic) across a partially permeable membrane.

Equilibrium is when the concentrations on each side of the selectively permeable membrane are equal, and therefore, there is no net change over time and there is equal movement in both directions.

1.        First, I cut the potatoes into as similar as possible shapes using a potato chipper and a knife and measured the mass of each, picking the shapes which weighed the most similar.

2.        Next, I made the various sugar solutions. This was done by calculating the appropriate proportions in relation to the solution tables. Measuring cylinders were used to carry out this step.

3.        Then, I placed the potato shapes with certain sugar solutions into test tubes.

4.        The test tubes were left for approximately two hours so that osmosis could take place.

5.        The masses of the potato shapes were measured after drying off water residues; this data was recorded in a table.

The variable that was changed was the concentrations of sugar solutions.

Preliminary work and justifications of plan:

The first preliminary work completed was using raisins to obtain a broader understanding of osmosis and equilibrium. We measured the masses of raisins before and after osmosis took place, and chose similar weighing raisins to make sure that the results would be more valid. After osmosis happened, we measured the mass of each raisin again (after drying off water residues) and recorded this information in a table. From completing this work, I have learnt that not only the mass is important when making investigations such as these fair tests, but also the surface areas of the samples used should be taken into consideration. This is because, when the surface area is larger, the diffusion of water molecules through the plant cells increases, and so osmosis increases. However, the surface area of raisins is not directly proportional to its mass. Additionally there is not a very accurate method to measure the surface area of raisins, as their shapes are very irregular (with numerous grooves and ridges) These grooves and ridges mean that water remains in the gaps even after drying the raisins (in order to measure the masses accurately after osmosis has happened).

During the main preliminary work, I used two different vegetables (potato and carrot) and a couple of different sugar solutions. At first, I found it hard to comprehend the ideas behind osmosis and equilibrium, and apply these to completing an investigation. But after completing the graph (included in coursework) to illustrate the results, I understood the mistakes that I had made and knew that I would be able to correct these in the actual investigation. From observing that a small range of concentrations of sugar solutions made the results not very useful, weak and inconclusive,  I realised that by increasing this, I would be able to conclude a more valid and coherent conclusion. Furthermore, I learnt that by using sugar to make a solution was more plausible than salt as one would obtain a greater range of results and osmosis effects would become more noticeable and measurable.

The equipment chosen had an effect on the results by making them more valid. For example, a potato chipper machine was used as it is more accurate and easier than other methods. After using this, a knife was used to neaten up the potato shapes as (from the preliminary work), we learnt that the surface areas needed to be as similar as possible because this would make diffusion at a similar level for each potato shape. To add, the weighing scales which were used measured objects to two decimal places. Therefore, the measurements would be more accurate and so the conclusion made would be more precise also.

Various variables had to be controlled to ensure that the investigation was a fair test. Examples of these were:

−        Temperature: During the time when osmosis was taking place, the test tubes were kept in the same place, which made sure that the temperature was the most stable possible in the circumstances. Temperature can affect the results because by increasing the temperature, the particles will have more kinetic energy and so they will cover more surface area of the membrane in a given time. Therefore, the probability that the water molecules enter a gap in the membrane increases. And in turn, this means that equilibrium will be reached faster.

−        The surface areas of the potato shapes: This was needed to be controlled because when the surface area of a potato shape is larger, more and faster diffusion will take place as there is more space for it to do so. In turn, the rate of osmosis increases. To control this variable, I used a potato chipper machine to first cut the shapes equally, but after I also used a knife to neaten the edges, this would ensure a similar enough surface area of each potato shape.

−         Type of potato: Different potatoes contain different amounts of water. This means that their weight could go up or down (with the same concentration of external sugar solution) depending on the different type of potato. The same type of potato, from the same packet of potatoes was used to guarantee that this variable would be controlled.

−        Furthermore, it was important to completely submerge each potato shape in the water as otherwise some shapes would receive more contact with the external solution than others. If this happened, osmosis would occur more in certain test tubes.

−        Additionally, the volumes of the external solutions were measured accurately using a measuring cylinder in order to be equal enough in each test tube.

−        Each potato shape was placed into their individual test tube as close as possible to the same moment. Similarly, they were removed from the external solutions at the same time. By some potato shapes remaining in their external solutions longer than others, more osmosis would happen (meaning possibly larger mass changes) and equilibrium will be reached faster in certain test tubes.

In some cases, it can be difficult to be precise in controlling variables. As an example, it is virtually impossible for two potato shapes to have exactly the same mass or surface area. Also, external heat sources could have been used nearby, this could have altered the results as temperature has an effect on osmosis. Similarly, it would not have been possible to precisely ensure that the test tubes were not exposed to domestic devices such as fans or other external heat sources other than natural and artificial light. This is because, as the investigation was completed in school, the investigators wouldn’t have remained there constantly to monitor the external temperature.

−        We could have used a larger array of vegetables to experiment with. Then produce graphs from the data and compare these with each other.

−        If similar methods were carried out (validly), and they all supported the same conclusion. This should increase one’s confidence in the conclusion. This is because, as with anything, when more data confirms a theory or hypothesis, it becomes more likely to be valid.

The final data which I collected I am fairly confident about. One can conclude a viable conclusion from the data. Although, some of the range bars could be considered quite wide and therefore too vague and inaccurate. There was only one outlier, and so by this I can say that the data overall wasn’t too inaccurate. I dealt with this outlier by highlighting this in the data table and excluding it from the averages and graph. The first range bar (0 mol/dm3 of sugar) is the largest of all in the graph. It ranges from 16.1 to 19.3% mass change (a 3.2% difference). The second range bar (from the concentration of the external sugar solution of 0.2 mol/dm3) is significantly shorter (ranging from 4.2 to 5.4% mass change – a 1.2% difference). The third ranges from -4.2 to -6.7% (a 2.5% difference).  The range of the concentration 0.6 mol/dm3 was from -14.8 to -16.4% (a 1.6% difference). Finally, the shortest range bar was the last for 0.8 mol/dm3 whichranged from -18.6 to -19.4% (a 0.8% difference). I suspect that the narrowness of this range bar was due to an anomaly being removed. Otherwise, the range would have been from -15.3 to -19.4% (a 4.1% difference).

Most of the data lies very close to the line of best fit, only the last average did not continue the previous line. The reason for this is because of plasmolysis:

As the cell membrane is selectively permeable, osmosis will occur between the plant cell and the external solution. (As explained previously), when the external solution has a lower concentration than the cell, osmosis happens in the direction of the cell – external solution, so that the cell loses mass to become flaccid, if the cell keeps losing more mass then the cell will also become plasmolyzed (shrunken). Soon, the cell (including vacuole) will no longer have any water molecules left to diffuse out from the cell. In turn, this explains how the  gradient of mass change changes substantially (as the mass change difference will be less than previously.