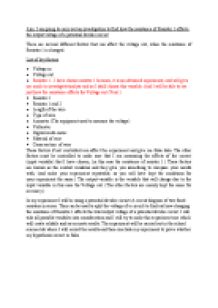 Aim: I am going to carry out an investigation to find how the resistance of Resistor 1 affects the output voltage of a potential divider circuit

Aim: I am going to carry out an investigation to find how the resistance of Resistor 1 affects the output voltage of a potential divider circuit

There are several different factors that can affect the voltage out, when the resistance of Resistor 1 is changed.

These factors if not controlled can affect the experiment and give me false data. The other factors must be controlled to make sure that I am measuring the affects of the correct (input variable) that I have chosen, (in this case the resistance of resistor 1.) These factors are known as the control variables and they give you something to compare your results with, (and make your experiment repeatable, as you will have kept the conditions for your experiment the same.) The output variable is the variable that will change due to the input variable in this case the Voltage out. (The other factors are mainly kept the same for accuracy.)

In my experiment I will be using a potential divider circuit (A circuit diagram of two fixed resistors in series.

In my preliminary I decided that the apparatus used were good enough to use in the actual experiment. But the method used wasn’t very reliable as I didn’t do any repeats. This was unreliable for two reasons because one there was no way for me to distinguish whether my data was false or not (outliers) and two I could not create an average. An average result of your data gives you a much more accurate answer to the “actual” value/ answer. The more repeats you do, the closer your average is to the actual answer. Repeats increase the validity of your average. I have chosen to repeat each separate part of the method three times.

I made sure that resistor 1 (10k ohms) and resistor 2 (47k ohms) were attacked to the three wires, using the four crocodile clips that were attached to the ends of the wires. Then making sure that the multi meter was set to 20 (volts) I turned the power pack on to 12 volts. Once the power pack is turned on I must measure the Vin by connecting the two wires from the multimeter to the power pack. (If numbers come in negatives then the wires must be switched round.) I did this again for accuracy reasons, as the voltage is bound to change as I am purposefully changing the resistance of the circuit. The power pack itself isn’t a hundred percent accurate either. Then I would measure the resistance of resistor 2 as this would give me the voltage out. I did this by connecting the wires from the multimeter to either ends of resistor 2.

Once I had done this, I would immediately turn the power pack off, for health and safety reasons, but also so that the resistance/ ohms of the resistor doesn’t change either. Then I would keep resistor 2 the same but would change resistor 1 to 12k this time. I would repeat the method above until I have done all of the different values needed for resistor 1, to the highest value chosen 100k ohms. Then I would for repeat this whole process for every resistor 1 value, another two times, to give me an average reading for Vout. The importance of averages has been explained above.

Again if the control variables are not controlled then can affect the experiment and give me false data. They must be controlled to make sure that I am measuring the affects of the input variable, Resistor 1.

The more resistance (i.e. the more atoms) there is in a wire, the harder it is for the electrons (the current) to get around the circuit. And so these collisions between the atoms and electons cause friction, which creates the heating effect on the wire. The resistance effectively slows down the current.

The part of the equation in red is another way of calculating the current without actually needing to know the actual value for it.

This is how the apparatus was set out.

In my preliminary work we set up the experiment like this. I used a Digital multi meter (it was used because it can measure in both volts and amps.) I used five wires including the two attached to the multi meter, and 4 crocodile clips. Two resistors, resistor 1 and resistor 2. I kept the ohms of resistor 2 the same (at 10k ohms) and resistor 1 was changed each time. (1.2, 4.7, 7.5 and 8.2.) For the power source I used a power pack whose highest voltage was 12 volts.