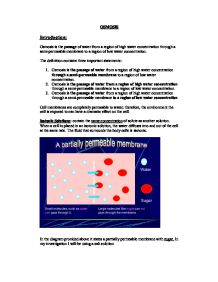 Example: the original mass of 0m is 0.905. After being in the solution for 5 minutes the final mass is 0.930. From that I can now work out the change in mass and the % change in mass this will again happen after 10 and 15 minutes I will start off at 0m then go up to 0.25m, then to 0.5m and finishing at 0.75m after the chip has been in the solution for the correct time it has to be dried. Then will be weighed again for the final mass (explained above, underlined) At the end of the experiment which will roughly take place over two lessons I will collect the results which will be shown later Apparatus: The apparatus needed for this experiment will be: * Stop watch, to time 5, 10 and 15 minutes. * 3 potato chips (all measuring 2.5cm) * Petri dish * 0m, 0.25m, 0.5m, 0.75m, 1m salt solution. * Balance * Measuring cylinder * Salt * Borer, knife . Fair test: To make my experiment a fair test I will keep these things the same: * Size, measurement of potato * Brand of potato * Time in solution (5, 10 and 15 minutes) The only thing I can change is the strength of the salt solution. Results: After completing for experiment my results are as follows: 0m Original mass (g) ...read more.

Half a Petri dish was filled for each experiment. * Timing was accurate, however as I mentioned some of the chips were left for a few extra tenths of a second. But overall each timing was correct. Factors I feel that were not as accurate as I would have liked is that the potato chips may not have all been the same size. We measured them out at 2.5cm each but 1 or 2 might have been either a little bit bigger or even a little bit smaller. we did however use the correct tools to cut and measure the chips so the measurements wouldn't of been that out. Some results came back anomalous, instead of repeating it, we simply took the anomalous result out, and found the average by adding up the two other % changes in mass, and dividing it by 2. If in 1 experiment there wasn't an anomalous result we would have added up all 3 % changes and then divided by 3. Nothing during the experiment happened that would have been of any use or advantage/disadvantage. Maybe except that on a few of our results they came back anomalous, but we did not know this until the experiment was over and new weights were given and the % change in mass was found. If we were to do another experiment using a potato chip we could maybe change the length of time, or change how much salt solution we actually used in each experiment. ...read more.