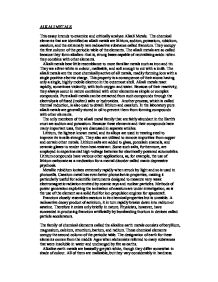 ALKALI METALS This essay intends to examine and critically analyse Alkali Metals. The chemical elements that are identified as alkali metals are lithium, sodium, potassium, rubidium, caesium, and the extremely rare radioactive substance called francium. They occupy the first column of the periodic table of the elements. The alkali metals are so called because they form alkalies--that is, strong bases capable of neutralizing acids--when they combine with other elements. Alkali metals bear little resemblance to more familiar metals such as iron and tin. They are silver-white in colour, malleable, and soft enough to cut with a knife. The alkali metals are the most chemically active of all metals, readily forming ions with a single positive electric charge. This property is a consequence of their atoms having only a single, highly mobile electron in the outermost shell. Alkali metals react rapidly, sometimes violently, with both oxygen and water. Because of their reactivity, they always occur in nature combined with other elements as simple or complex compounds. Pure alkali metals can be extracted from such compounds through the electrolysis of fused (molten) ...read more.

Methods of power generation exploiting the ionization of caesium are under investigation, as is the use of the element as a solid fuel for ion-propulsion engines for spacecraft. Francium closely resembles caesium in its chemical properties but is unstable. A radioactive decay product of actinium, it in turn rapidly breaks down into radium or astatine. Therefore it exists only briefly in nature. Physicists, however, have succeeded in producing francium artificially by bombarding thorium in devices called particle accelerators. The family of chemical elements called the alkaline earth metals consists of beryllium, magnesium, calcium, strontium, barium, and radium. These chemical elements occupy the second column of the periodic table. The designation of earth for these elements comes from the middle Ages when alchemists referred to many substances that were insoluble in water and unchanged by fire as earths. Alkaline earth metals are basically greyish white, though they differ somewhat in shade of colour. All of them are malleable, but they vary considerably in hardness. Beryllium, for example, is hard enough to cut glass, while barium is as soft as lead. Unlike the alkali metals, many alkaline earth metals are insoluble in water. ...read more.

Barium metal, like metallic strontium, has few uses. A number of its compounds, however, are important industrially. Barium carbonate, for example, is used in producing fine glassware and optical glass. Barium sulphate, a highly insoluble salt, serves as a pigment in paints and cosmetics and as filler in paper and rubber goods. It also has an important medical application. Physicians commonly have their patients ingest a solution of barium sulphate before making radiographs (X-ray pictures) of the gastrointestinal, or digestive, tract. The barium compound absorbs x rays, providing an excellent contrast medium that allows the intestines to be seen on the radiographs. Radium, the heaviest of the alkaline earth metals, is highly radioactive and is continuously formed in nature by the decay of uranium-238. For many years radium was used for treating cancerous tumours, but it has largely been supplanted for this purpose by certain less hazardous radioactive isotopes such as cobalt-60. It remains the chief source of the radioactive element radon, which is also employed in certain medical procedures and practices. Alkali Metals are soft, white and malleable.. This is because of their atomic structure and compound structure. They are also abundant in the Earths crust and are very important in all aspects of the scientific life. ...read more.