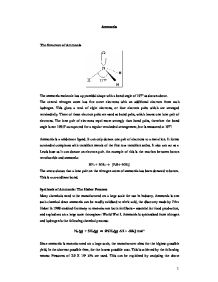 Ammonia - The Structure of Ammonia.

Ammonia The Structure of Ammonia The ammonia molecule has a pyramidal shape with a bond angle of 107� as shown above. The central nitrogen atom has five outer electrons with an additional electron from each hydrogen. This gives a total of eight electrons, or four electron pairs which are arranged tetrahedrally. Three of these electron pairs are used as bond pairs, which leaves one lone pair of electrons. The lone pair of electrons repel more strongly than bond pairs, therefore the bond angle is not 109.5� as expected for a regular tetrahedral arrangement, but is measured at 107�. Ammonia is a unidentate ligand. It can only donate one pair of electrons to a metal ion. It forms octahedral complexes with transition metals of the first row transition series. It also can act as a Lewis base as it can donate an electron pair. An example of this is the reaction between boron tetrafluoride and ammonia: BF3 + NH3 ? [F3B?NH3] The arrow shows that a lone pair on the nitrogen atom of ammonia has been donated to boron. This is a co-ordinate bond. Synthesis of Ammonia: The Haber Process: Many chemicals need to be manufactured on a large scale for use in industry. Ammonia is one such chemical since ammonia can be readily oxidised to nitric acid, the discovery made by Fritz Haber in 1908 enabled Germany to manufacture both fertilisers - essential for food production, and explosives on a large scale throughout World War I. ...read more.

The strength of the base is indicated by the position of the equilibrium established when the base is dissolved in water. If the equilibrium lies to the right, the base is strong: if it lies to the left the base is weak. Ammonia is the most commonly encountered weak base: NH3(aq) + H20(l) = NH4+(aq) + OH-(aq) The equilibrium here is well over to the left; the disassociation into ammonium ions and hydroxide ions is incomplete. Hence, ammonia is a weak base. Ammonia as a buffer Ammonia and ammonium chloride in solution can be used as a basic buffer. Such a solution would be able to maintain its pH above 7 when small amounts of acid or base are added, and also on dilution with water. This is because there is an equilibrium between the components in the solution: NH4+(aq) = NH3(aq) + H+(aq) Also Aqueous ammonia molecules and ammonium ions act as a source for protons and will, within limits, maintain an almost constant pH. Dilution doesn't affect the pH as the ratio of concentrations is constant under dilution. Ammonia and Amines: Replacement of the hydrogen atoms in ammonia by alkyl or aryl groups gives rise to three types of amine: RNH2 (Primary), R2NH (secondary), R3N (tertiary) ...read more.

ions, however, only four of the six water molecules on copper are replaced. As with cobalt, when aqueous ammonia is added to a solution of a copper(II) salt, the first change observed is the formation of a blue precipitate of the hydroxide. This then dissolves when an excess of ammonia is added and a deep-blue solution of the tetraamminebisaquacopper(II) ion is formed. [Cu(H2O)6]2+ + 4NH3 = [Cu(NH3)4(H2O)2]2+ + 4H2O blue solution deep-blue solution Further substitution can be achieved when the concentration of ammonia is increased (e.g. by cooling the solution in ice and saturating it with ammonia gas, or by using liquid ammonia rather than aqueous ammonia), but in concentrated aqueous ammonia, the equilibrium position reached is that in which the dark-blue [Cu(NH3)4(H2O)2]2+ ion is formed. This ion has four ammonia molecules in a square-planar arrangement around copper with water molecules occupying the other two octahedral positions above and below the plane. The bonds to water are longer and weaker than the bonds to ammonia. Substitution involving Cr(III) complexes are very slow. [Cr(NH3)3] takes several minutes to form whereas [Cr(NH3)3]2+ forms immediately. [Cr(H2O)6]3+ � [Cr(NH3)3]2+ red-violet solution purple solution Ammine complexes are not formed with [Fe(H2O)6]2+, [Fe(H2O)6]3+ and [Al(H2O)6]3+. Cisplatin is an important anti-cancer drug containing NH3 molecules and Cl- ions are ligands in the four-co-ordinate square-planar complex of platinum(II). It is used in chemotherapy and has a remarkable success rate in curing certain types of cancer. Cl NH3 Pt Cl NH3 ?? ?? ?? ?? 1 ...read more.