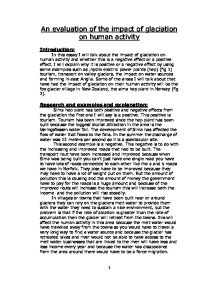 an evaluation of the impact of glaciation on human activity

An evaluation of the impact of glaciation on human activity Introduction: In this essay I will talk about the impact of glaciation on human activity and whether this is a negative effect or a positive effect. I will explain why it is positive or a negative effect by using some examples such as ,hydro electric power plants (hep) (fig 1) tourism, transport on valley glaciers, the impact on water sources and farming in east Anglia. Some of the areas I will talk about that have had the impact of glaciation on their human activity will be the fox glacier village in New Zealand, the sima hep plant in Norway (fig 2). Research and examples and explanation: Sima hep plant has both positive and negative effects from the glaciation the first one I will say is a positive. This positive is tourism. Tourism has been improved since the hep plant has been built because the biggest tourist attraction in the area is the V�ringsfossen water fall. ...read more.

In villages or towns that have been built near or around glaciers they can rely on the glaciers melt water to provide them with the water they need to sustain a nice environment, but the problem is that if the rate of ablation is greater than the rate of accumulation then the glacier will retreat from the towns. this will affect the human activity in this area because the melt water would have travelled away from the towns so you would have to travel a very long way to find a water source and because the glacier has retreated lakes and river would not be able to have access to the melt water businesses that are linked to the river will have less and less income every year and because the water has disappeared from the area around there would have to be a force migration. A positive for a glacier is making communications better, thanks to glaciation; glaciers can make travelling through mountainous places easier because when the glacier travelled through a mountainous place it could have carved a valley perfect for building (fig 4) ...read more.

Argument and conclusion: I think that all of these are important but on balance the positive take over from the negative. The negative of pollution is a big problem now since the south sea has stopped absorbing carbon dioxide but the positives have changed the ways of life. When the glaciers retreat it is a new place to explore and find fossils, ways to get around the landscape is easier because the glaciers have carved through mountains there is now a cheap energy source that increases tourism and trade as well so small business's can expand,farming can be made better because of the boulder clay left behind from the last glaciation this left a nutritious place to grow crops and again increase trade so small business's can expand. The problem is that the negative could count them all out for the reason I stated above about the south sea, and if we can cut the carbon emissions from building new roads or to improve roads so big lorries can travel on them ?? ?? ?? ?? 1 ...read more.

The student has answered the question set with fair reasoning and with the use of images to back up the points made. I do feel although that the reasoning could be more explicit in places, so try and expand any ...

The student has answered the question set with fair reasoning and with the use of images to back up the points made. I do feel although that the reasoning could be more explicit in places, so try and expand any and every point you makes as it shows the examiner that you do really know what you are on about.

The basic reasons behind the conclusions are good and valid, but I feel that at some points that there could had been more explanation behind the points as it might have gained them a few more marks. Using images to back up your points is entirely valid and in some cases pictures can better illustrate a point than words can, but in this case maybe the images could have been embedded next to or near to the point that they were backing up. The conclusion reached is appropriate when considering the arguments given.

There are a few spelling and grammatical errors, but they are not major. I do feel that it could read better, take for example the section where it says ' the first one i will say is positive' this does not sound right instead they could have said 'the first effect on the surrounding area is positive and i will now focus on this'. People are more likely to award marks if what they are reading is easy to follow and you do not have to try and work out what the writer is trying to convey.
    