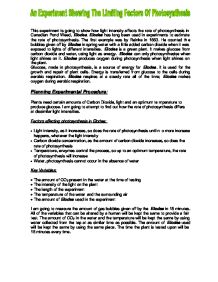 An Experiment Showing The Limiting Factors Of Photosynthesis.

This experiment is going to show how light intensity affects the rate of photosynthesis in Canadian Pond Weed, Elodea. Elodea has long been used in experiments to estimate the rate of photosynthesis. The first example was by Reinke in 1883. He counted the bubbles given off by Elodea in spring water with a little added carbon dioxide when it was exposed to lights of different intensities. Elodea is a green plant. It makes glucose from carbon dioxide and water, using light as energy. Elodea can only photosynthesise when light shines on it. Elodea produces oxygen during photosynthesis when light shines on the plant. Glucose, made in photosynthesis, is a source of energy for Elodea. It is used for the growth and repair of plant cells. Energy is transferred from glucose to the cells during aerobic respiration. Elodea respires at a steady rate all of the time; Elodea makes oxygen during aerobic respiration. Planning Experimental Procedure: Plants need certain amounts of Carbon Dioxide, light and an optimum temperature to produce glucose. I am going to attempt to find out how the rate of photosynthesis differs at dissimilar light intensities. ...read more.

The amount of Elodea used will be kept the same by using the same piece. The time the plant is tested upon will be 15 minutes every time. Apparatus and Set-up: Predictions: I predict that the amount of bubbles of gas produced by the piece of pondweed will diminish as the plant is taken further from the light source. This is because the energy needed for a plant to photosynthesise is gained from the sun. We can replicate this in a laboratory using a lamp. Without light the plant is not able to photosynthesise therefore not producing bubbles of oxygen. Plan of Action: 1. Collect equipment: - Beaker, Pondweed, Water, Funnel and Boiling/Test Tube. 2. Arrange equipment in format shown overleaf. 3. Extinguish all extinguishable light sources. 4. Turn on test lamp and start timing 15 minutes on a stopwatch. 5. Count the bubbles for 15 minutes. 6. Record results in a table. 7. Draw graph and conclude experiment. Analysing Evidence and Drawing Conclusions: Plant Distance from Lamp (cm) Number of Bubbles Counted 10 75 20 54 30 49 40 43 50 37 60 32 70 32 80 24 90 2 100 2 These are the results taken from my experiment. ...read more.

I have followed all of the procedures set out in my planning so all of my results are fair and the test as a whole was fair. Between experiments the pondweed may not have had time to recover so if I did this experiment again I would take an hour between experiments to allow the pondweed to recover. To support my conclusion I would investigate the results of other experiments performed by other people such as members of my class or people who have published their findings online. This experiment is very 'hit and miss' I had to perform the experiment several times before I found a piece of pondweed that produced any bubbles at all, as is the way with most living things. If I were to do the experiment again there would be several things that I would change: > I would spend more time on improving the accuracy of the experiment rather than writing it up. > I would find a more efficient way of finding out how much gas is produced by the plant possibly by using a capillary tube and a ruler. > I would make sure that the laboratory was in complete darkness with the exception of the test light source before commencing the experiment. ...read more.