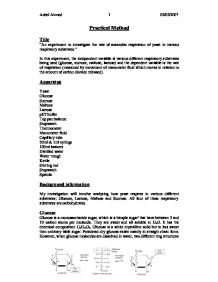 Practical Method Title "An experiment to investigate the rate of anaerobic respiration of yeast in various respiratory substrates." In this experiment, the independent variable is various different respiratory substrates being used (glucose, sucrose, maltose, lactose) and the dependent variable is the rate of respiration (measured by movement of manometer fluid which moves in relation to the amount of carbon dioxide released). Apparatus Yeast Glucose Sucrose Maltose Lactose pH7 buffer Top pan balance Stopwatch Thermometer Manometer fluid Capillary tube 20ml & 1ml syringe 100ml beakers Distilled water Water trough Kettle Stirring rod Stopwatch Spatula Background information My investigation will involve analysing how yeast respires in various different substrates: Glucose, Lactose, Maltose and Sucrose. All four of these respiratory substrates are carbohydrates. Glucose Glucose is a monosaccharide sugar, which is a 'simple sugar' that have between 3 and 10 carbon atoms per molecule. They are sweet and all soluble in H2O. It has the chemical composition C6H12O6. Glucose is a white crystalline solid but is less sweet then ordinary table sugar. Powdered dry glucose exists mainly in straight chain form. However, when glucose molecules are dissolved in water, two different ring structures are formed. See picture. Fig 1 These ring structures are more stable in solution, so that, at equilibrium, almost all of the molecules are present as rings, with the straight chain form being a relatively short-lived intermediate. The structures of ?-glucose and �-glucose differ only in the position of the -OH and -H groups attached to carbon atom number 1. Lactose Lactose is a disaccharide which is formed by condensation reactions (where water is removed) between two monosaccarides, glucose and galactose. They are joined together by a glycosidic bond. It consists of galactose and glucose molecules joined by a 1, 4 glycosidic link. Fig 2 Lactose is the only common sugar that is of animal origin. Other sugars, such as sucrose and fructose, can be found only in plants. ...read more.