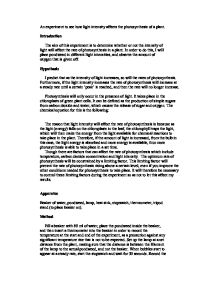 An experiment to see how light intensity affects the photosynthesis of a plant.

In this experiment I will carry out, I hope to close the blinds in the room and not have the lights on, so the exterior light is not affecting my results. Though the preliminary experiment will, however, show me whether light intensity has any effect or not at all. In this case it has had an effect, and this preliminary experiment supports my hypothesis that as the light intensity increases, as the lamp gets closer to the plant, the rate of photosynthesis, shown by the amount of bubbles produced, increases as well. The experiment also shows that in order to obtain more readings, I should have a shorter time interval for each measurement of oxygen bubbles. Analysis I drew my graph with a line of best-fit curve. I did this instead of a straight line because of the clear pattern of the points on the graph. My graph shows me that an increase in light intensity will certainly increase the rate of photosynthesis. Both my graphs and my results support my hypothesis fully. The prediction I made that, as the light intensity increases so will the rate of photosynthesis, was backed up with the results I obtained in this experiment. This is because photosynthesis will only occur in the presence of light. ...read more.

If I were to carry out the experiment again over a longer period of time, in order to obtain more readings, it would then be necessary to add sodium hydrogen carbonate to the water so the carbon dioxide concentration would be increased. In my result tables, one table had a higher rate of oxygen bubbles produced than the other, and this is due to the fact I used different pondweed the second time, so carbon dioxide levels would not have been the same. Due to the small volumes of oxygen produced, my experiment was perhaps not as accurate as it could have been though I still think it was accurate enough to justify and support my hypothesis. I could improve the experiment by simply increasing the time taken, so fewer errors are able to occur. I could not make this adjustment due to time constraints. To extend my investigation into rate of photosynthesis further, I could try investigating other limiting factors individually, as well as perhaps trying to link in some of the other limiting factors with my current experiment. Further investigation into the light factor could be exploring the effect on the rate of photosynthesis by different coloured lights, which could also lead to whether any other types of lights, like fluorescent lights, would also have a different effect on the rate. ...read more.