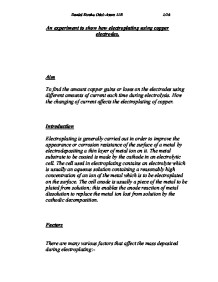 An experiment to show how electroplating using copper electrodes.

An experiment to show how electroplating using copper electrodes. Aim To find the amount copper gains or loses on the electrodes using different amounts of current each time during electrolysis. How the changing of current affects the electroplating of copper. Introduction Electroplating is generally carried out in order to improve the appearance or corrosion resistance of the surface of a metal by electrodepositing a thin layer of metal ion on it. The metal substrate to be coated is made by the cathode in an electrolytic cell. The cell used in electroplating contains an electrolyte which is usually an aqueous solution containing a reasonably high concentration of an ion of the metal which is to be electroplated on the surface. The cell anode is usually a piece of the metal to be plated from solution; this enables the anode reaction of metal dissolution to replace the metal ion lost from solution by the cathodic decomposition. Factors There are many various factors that affect the mass deposited during electroplating:- 1). Current (A) - An increase in the amount of current increases the amount of substance deposited in a fixed amount of time, because there is more energy available to move ions/electrons to the cathode from the anode. A smaller current will pump fewer copper ions from the anode to the cathode in the same amount of mass gained on the cathode is lower. 2). Time - The longer time can let more copper ions from the anode to the cathode if the current are the same. There are still more factors which can affect the mass deposited during electroplating. ...read more.

It is possible to get easily in the lab, and it can indicate by a normal ammeter as well; it can reduce the effect of temperature rise in the reaction. The advantage is that the results will be reasonable results because they are not too high or not too low. The experiment will be left for five minutes as I think it is a reasonable tome for the experiment. Apparatus * Glass beaker * 1-24V Power source * Variable resistor * Cable wires * Top pan balance (accurate to 2dp) * Ammeter * Stopwatch * Copper II Sulphate solution * Copper electrodes Detailed Method > First connect the two terminals of the circuit. > Using the ammeter to measure the current flowing through the circuit. > Then use the variable resistor to adjust the resistance of the circuit to the required current. > Next attach a copper anode to the positive terminal of the circuit. > Then weigh a copper cathode and record its mass. > Then weigh a copper anode and record its mass. > Then attach the copper cathode to the negative terminal of the circuit. > Then pour 40ml of copper II sulphate into a beaker. > Then lower the cathode and anode into a bath of copper II sulphate solution, ensuring that both are fully submerged. > Then leave the circuit complete for five minutes. > Then put two drops of alcohol on the electrodes after removing after five minutes. > Then allow drying by shaking them. > Then weigh the cathode and subtract the mass from the new mass, then its area divided it. ...read more.

I would carry out another experiment but this time change the concentration of copper II sulphate solution every time the experiment was carried out, but in different concentrations. I would keep all the other variables the same and see if the change in concentration affected the mass gained on the cathode. The experiment went quite well as I expected, except some occasional errors that have occurred during the experiment. The errors that occurred causing some of the result to be odd could have been that: * The electrodes I used were not the same for some of the experiments. Since the practicals were done on different days. * The starting time was sometimes delayed, which might have caused the mass to increase. * * * The surrounding temperature was not the same through out the experiment but theoretically the surrounding temperature does not have the affect on the decomposition of the solution. * The amount of current might have caused the decomposition to be different because if the amount of current was increased due to the conductivity of the solution. This will cause the decomposition to slow down. * The results that I have corrected I think that they are accurate enough to the actual results to be obtained. * It is accurate enough because for some of the experiments I did them twice to get the average result. This method is the best way to make the result accurate as possible. * The experiments could have been improved by that the rheostat could have been change to an electric one, which is more accurate and it would have given better results. Daniel Kwaku Odoi-Asare 11B 1/16 ...read more.