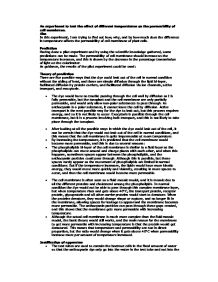 An experiment to test the effect of different temperatures on the permeability of cell membrane.

An experiment to test the effect of different temperatures on the permeability of cell membrane. Aim In this experiment, I am trying to find out how, why, and by how much does the difference in temperature affects the permeability of cell membrane of plant cells. Prediction Having done a pilot experiment and by using the scientific knowledge gathered, some predictions can be made. The permeability of cell membrane should increase as the temperature increases, and this is shown by the decrease in the percentage transmission of light on the colorimeter. As guidance, the results of the pilot experiment could be used: Theory of prediction There are five possible ways that the dye could leak out of the cell in normal condition without the aiding of heat, and these are simple diffusion through the lipid bi-layer, facilitated diffusion by protein carriers, and facilitated diffusion via ion channels, active transport, and exocytosis. * The dye would have no trouble passing through the cell wall by diffusion as it is fully permeable, but the tonoplast and the cell membrane are only partially permeable, and would only allow non-polar substances to pass through. As anthocyanin is a polar substance, it cannot leave the cell by diffusion. Active transport is the next possible way for the dye to leak out, but this process requires energy, and so it is not likely to occur. Exocytosis is possible through the cell membrane, but it is a process involving bulk transport, and this is not likely to take place through the tonoplast. * After looking at all the possible ways in which the dye could leak out of the cell, it can be certain that the dye would not leak out of the cell in normal conditions, and this means that the cell membrane is quite impermeable at room temperature. * By increasing the temperature, it is predicted that the cell membrane would become more permeable, and this is due to several reasons: * The phospholipids bi-layer of the cell membrane ...read more.

* At the end of the 20 minutes, the test tubes are taken out of the water baths immediately, and the dyed water in each would now be poured into a different curvette, prepared to be placed into the colorimeter. * One by one the 4 cuvettes with the dyed water can be placed into the colorimeter and the % transmission of light passing through the dyed water can then be recorded. Risk assessment Normal lab safety precautions must always be taken, but apart from those, there are few other precautions that are needed for this experiment. The water bath can get up to 80�C, and might burn the skin, and so caution is needed when putting the test tubes in. When cutting the beetroot with the scalpel, safety spectacles are needed to be worn as the blade could break off and damage the eye. When the temperature range was between 20�C and 60�C, the drop in light transmission, from 95% at 20�C to about 80% at 60�C, was in proportion to the increase in temperature, creating a steady group of results, lying on a straight line on the graph. The calculated gradient of this part of the graph is -0.5%�C-1, meaning that for every �C increased the percentage light transmission would drop by 0.5%. This was most likely caused by the increased in the fluidity of the phospholipid bi-layer. When temperature increased, the particles in the membrane got more kinetic energy and so moved more at greater magnitude; this created gaps more often than usual in the plasma membrane to allow the anthocyanin leaking out of the plant cells. At the same time, when temperature increased, the dye got more kinetic energy as well, leading to an increased rate of diffusion. When the anthocyanin leaked out of the beetroot cells, it went into the water, which was tested in the experiment, and this dye, when passed through the colorimeter, absorbed some of the light, therefore reduced the % light transmission. ...read more.

* Although the colorimeter is only accurate to the nearest one % of light transmission, it should have a minimal amount of error as it is digital. Improvements To improve on the experimental procedures, several things could be done. The reliability of the experiment could be improved by trying to use the beetroot pieces cut out from the same beetroot, or at least from the same type of beetroot, instead of using beetroot of different sizes. For most experiments, doing more repeats would increase the reliability, but this would not apply to this experiment as over 90 readings were taken and there were at least 10 repeats done for each set of conditions. However doing the same experiment at more temperature conditions would increase the reliability as a smoother trend could be seen. To minimise sources of error, the first way to improve the experiment will be to cut the beetroot personally, instead of having them pre-cut, and also that a more accurate template could be used, which would keep a consistent surface area for different pieces of beetroot. Another way is to use proper electronic water baths to maintain the exact temperature for each of the different temperatures; although this is not practical as it would take time, however errors would be reduced greatly if this could be done. How safe is the conclusion Although there are noticeable amount of errors in the experiment, shown by the size of the error bars on the graph, the conclusion is still very valid and reliable. This is because although the possible amount of error is great, the line on the graph being not erratic shows that these possible errors did not occur in this experiment. Even if we try to plot the worst line on the graph within the range of the error bars, a line leading to the same conclusion would still appear. ...read more.