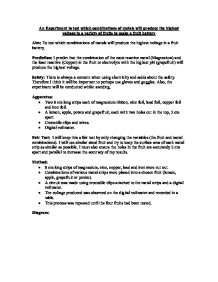 An Experiment to test which combinations of metals will produce the highest voltage in a variety of fruits to make a fruit battery.

An Experiment to test which combinations of metals will produce the highest voltage in a variety of fruits to make a fruit battery Aim: To test which combinations of metals will produce the highest voltage in a fruit battery. Prediction: I predict that the combination of the most reactive metal (Magnesium) and the least reactive (Copper) in the fruit or electrolyte with the highest pH (grapefruit) will produce the highest voltage. Safety: There is always a concern when using electricity and acids about the safety. Therefore I think it will be important to perhaps use gloves and goggles. Also, the experiment will be conducted whilst standing. Apparatus: * Two 8 cm long strips each of magnesium ribbon, zinc foil, lead foil, copper foil and iron foil. * A lemon, apple, potato and grapefruit, each with two holes cut in the top, 2 cm apart. * Crocodile clips and wires. * Digital voltmeter. Fair Test: I will keep this a fair test by only changing the variables (the fruit and metal combinations). I will use similar sized fruit and try to keep the surface area of each metal strip as similar as possible. I must also ensure the holes in the fruit are accurately 2 cm apart and parallel to increase the accuracy of my results. Method: * 8 cm long strips of magnesium, zinc, copper, lead and iron were cut out. ...read more.

0.48 0.485 Mg 0 0 0 0.82 0.57 0.695 1.02 0.91 0.965 Zn 0 0 0 0.14 0.35 0.245 Fe 0 0 0 Analysis of results: The bar graph result shows clearly that the highest potential difference was produced with the combination of Magnesium and Copper in the grapefruit, producing an average of 1.8 V. This confirms my initial prediction, where I stated that a combination of the most reactive and least reactive metal would produce the greatest potential difference. Scientifically, this is de to the reactivity series, oxidation and reduction, and is shown in the electrochemical series. Redox reactions occur more commonly when a reductant and oxidant are placed in direct contact, like Magnesium in copper sulphate solution. In galvanic cells however, they are spaced apart and placed in some form of electrolyte, in this case, a fruit. A conducting external circuit connects them. Let's assume the electrodes are Magnesium and Copper. Magnesium is a strong reducing agent. Electrons from the copper become free as the magnesium indirectly reacts with the copper through the external conducting material. The electrons move through the conductor to the copper cathode. A reaction takes place at the anode and the magnesium is oxidised: Mg(s) Mg 2+ (aq) + 2 e- These extra electrons are now transferred through the conducting circuit, creating a voltage. ...read more.

a voltage of 0.17 was produced, while the second reading was 0.49V. This could be because we didn't change the metal strips after every fruit, meaning they had been reacting with both the air and the electrolyte/fruit. Accuracy could also have been lacked due to the difficulty in cutting out equal sized strips. We had to use a steel nail of similar surface area because iron foil was unavailable. Fruits are also very unpredictable and vary. I think that we should have perhaps focused on one fruit, like the lemon, and used three different lemons to increase accuracy. This would perhaps be a more useful approach. I believe further investigations are needed to help fulfill the aim of the experiment. I think that acids and alkaline solutions should be used instead of fruits due to their unreliability. This will make the experiment quicker too. The outcome would be more predictable. The distance between the two metals in the fruit could be varied in further work to again test the voltages produced using different combinations of magnesium, iron, zinc, lead and copper. You could start them with a centimetre difference between them, and then increase this by a cm until it reaches 5 cm. A variety of fruits could again be used as a variable in this method. Other variables to be tested are the surface area of the metals and how that would affect the voltage produced, as it clearly seemed to affect my results. ...read more.