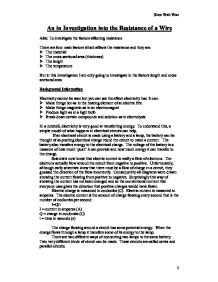 An in Investigation into the Resistance of a Wire.

An in Investigation into the Resistance of a Wire

There are four main factors which affects the resistance and they are:

Electricity cannot be seen but you can see the effect electricity has. It can:

In a nutshell, electricity is very good at transferring energy.  To understand this, a simple model of what happens in electrical circuits can help.

Scientists now know that electric current is really a flow of electrons.  The electrons actually flow around the circuit from negative to positive.  Unfortunately, although early scientists knew that there must be a flow of charge in a circuit, they guessed the direction of the flow incorrectly.  Consequently all diagrams were drawn showing the current flowing from positive to negative.  Surprisingly this way of showing the current has not been changed and so the conventional current that everyone uses gives the direction that positive charges would have flown.

This shows me that if I am going to investigate in the relationship between the length and the resistance I will need a larger range of lengths to get a more accurate result.

Investigating in the factor length

From my preliminary experiment I decided to do the main experiment which just one wire E28 but investigating more lengths than the preliminary one.  I chose E28 because it has the average cross sectional area out of three wires I investigated in.

The apparatus that I will need to do this experiment are:

I learnt from my pilot investigation that I need to do extra readings in order to obtain a set of accurate results.  First by setting up the apparatus as shown below in the diagram. With the voltmeter parallel to the wire and the ammeter in series with the wire.

needed to clip the crocodile clips too).  When doing this use two rulers side by side start from measuring at the 10cm mark all the time.

the length of the wire accurately.

Step 3        Straighten the wire and measured to 100cm exactly and put a piece of sellotape edge exactly on the mm of 100.  So that when the wire taken off the ruler the sellotape would still be attached to it.

Step 4        Clip the crocodiles clips exactly to the edge of the sellotape on the wire. The wire that is not in between the two crocodile clips will get no electricity flowing through it because they are not part of the circuit.

Step 5         Check that all the wires were connected properly to the other apparatus and then turn on the mains power and recorded the voltage and current for that length of that wire.  Take 5 readings for each length of wire.

In this experiment there was one variable which was not controlled and that was the length of the wire.  But all the rest stay constant and they were:

In this experiment I made sure before I started that there was no water around my apparatus because it is very dangerous.  I also checked for fault in the circuit before I start as well because that could also be dangerous.  When there was a current running through the circuit and there were exposed wires for example the clips I did not touch them because this could be very dangerous because there is electricity going through them.  I also did not touch the experiment wire because it could be hot due to the current and I could have included a switch in my circuit so that I can break the circuit quickly if I needed to.  I made sure that my bag was underneath the table as well so they are not in the way of other people.

Accuracy with the equipment

In order to reduce errors it is necessary to choose accurate and reliable equipment.  But the only equipment that were available for us to use at the time we the normal ammeter and volt meter which are not as accurate as the multi meters.  Because the normal ammeters and volt meters only give the reading to two decimal places whereas the multi meters can give up to three decimal places which means its more accurate than the normal meters.

For the wire Eureka 28

Ohm’s law actually states that the current flowing through the circuit is directly proportional to the applied voltage (if you double one, you double the other).

These electrons travel at a steady pace, when they come to different piece of wire, they have to slow down in order to be able to pass (different wire meaning the actual wire being used and the wires connecting the apparatus).  While moving through the wire, the electrons need to squeeze together.

The results lie on a straight line, which means there is a positive pattern.  The length that was 0cm had no resistance because there was no wire and therefore the circuit would be broken so there will be resistance.

The resistance of the wire was worked out by using the formula:

There were no anomalous results which mean the experiment was overall very accurate as the points lie very close to the best fit line.

My results supported my prediction that if I double the wire the resistance will double.

The measurements taken in the experiment were simple and straightforward and I could over half an hour obtain a set of results, which showed a definite pattern.

Most of the result lies on the straight line or very near the straight line and there were no anomalous results.  So this means this set of results is fully reliable and it supports my prediction earlier giving a positive pattern result.  But the reliability of the evidence can still be improved.  From my results I work out the accuracy of my results to see how accurate I was. This was done by taking the range of resistance (how much above or below the average resistance) and dividing that by the average resistance then multiplying it by 100% to get the percentage error. An example is shown below for one length of the E28 wire.

The rest of the results and their percentage errors are shown in the following table.