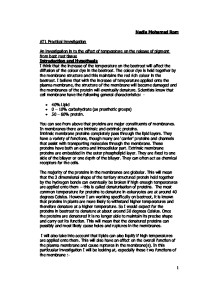 Nadia Mohamad Rom AT1 Practical investigation An investigation in to the effect of temperature on the release of pigment from beet root tissue Introduction and Hypothesis I think that the increase of the temperature on the beetroot will affect the diffusion of the colour dye in the beetroot. The colour dye is held together by the membrane structure and this maintains the red rich colour in the beetroot. I believe that with the increase of temperature applied onto the plasma membrane, the structure of the membrane will become damaged and the membranes of the protein will eventually denature. Scientists know that cell membrane have the following general characteristics: - * 40% Lipid * 0 - 10% carbohydrate (as prosthetic groups) * 50 - 60% protein. You can see from above that proteins are major constituents of membranes. In membranes there are intrinsic and extrinsic proteins. Intrinsic membrane proteins completely pass through the lipid layers. They have a variety of functions, though many are 'carrier' proteins and channels that assist with transporting molecules through the membrane. These proteins have both an extra and intracellular part. Extrinsic membrane proteins are embedded in the outer phospholipid layer. They are fixed to one side of the bilayer or one depth of the bilayer. They can often act as chemical receptors for the cells. The majority of the proteins in the membranes are globular. This will mean that the 3 dimensional shape of the tertiary structured protein held together by the hydrogen bonds can eventually be broken if high enough temperatures are applied onto them - this is called denaturisation of proteins. The most common temperature for proteins to denature in eukaryotes are at around 40 degrees Celsius. However I am working specifically on beetroot, it is known that proteins in plants are more likely to withstand higher temperatures and therefore denature at a higher temperature. So I would expect for the proteins in beetroot to denature at about around 50 degrees Celsius. ...read more.

However this meant that I would run the risk of getting a temperature that would have been lower than 20 degrees Celsius. Anything lower than what is considered the normal beetroot temperature could have damaging effects to the membranes. I would be testing on the effects of how the decrease of temperature would effect the release of red pigment, instead of the increase of temperature, so I had to settle for 24 degrees Celsius. I will take note that the 24 degrees Celsius temperature range was the 1st temperature range that i had conducted tests on. This was mainly because I could get the approximate required temperature the most quickly, it was not necessary for me to wait for it to heat up first. Unfortunately there were further problems encountered with the testing of this particular temperature range. The problem was that whilst I was testing the test fluids onto the colorimeter, there was a member of the sixth form group that wanted to use the same colorimeter. For the third reading of the test fluid, I had about approx. 10 -13 seconds difference from the first and second readings taken from the test fluids of the same temperature range. What I have also done during the preparation of the beetroot pieces is to cut an extra 6 pieces as a control giving me the choice of the reliable looking, same sized beetroot pieces. I was able to do this because of the extra space from the beetroot that I was able to gain more uniform cylinders. Whilst actually cutting the beetroot pieces, I discovered that it was more easier for me to cut out the pieces into the required length after having cut each uniform cylinder. I had first cut the pieces into 1cm in length pieces, then I had cut the 1cm in length pieces into 2 1/2 cm pieces using a ruler to measure it. ...read more.

It was of the same size, although not exactly of the same weight, the same amount of surface area did come into contact with the same amount of water and at the same amount of time given. Although I did not weigh the pieces to ensure that the mass were the same, the beetroot pieces were all cut using the same way - through cutting sideways of the beetroot to obtain uniform cylinders- it was likely to have the same composition of cells. Though it was possible, altough rare that they would be exceptions, hence causing anomalous results. If I was to repeat the experiment again and start to consider weighing the pieces, I would have to use specialised weighing equipment. There would also be the problem of what to do if the pieces' weights did not match one another - could it be that I would have to cut a bit of the piece, hence making the surface area contact with the water to later be different and unfair during the tests. If I were to make further improvements of the investigation I would have more than one person working in my group for the investigation and would also give my myself more time. I would have also like more water baths so I could have more temperature ranges to work from. This will enable me to analyse more precisely what would have happened between the temperatures that I had done. It could have been that between 60 degrees Celsius and 65 Celsius, the liquification of lipids had actually blocked the route of the release of red pigment a little, and a decrease of light absorption would have been evident. I would have also have liked to perform more than 3 tests - say about 5 at least, with enough colorimeters and 'hands' to make it fair, and would get a very accurate mean of results from. As this would prove that the results obtained are most likely not obtained due to an external factor. ?? ?? ?? ?? 1 ...read more.