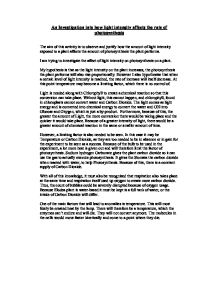 An Investigation into how light intensity affects the rate of photosynthesis.

An Investigation into how light intensity affects the rate of photosynthesis The aim of this activity is to observe and justify how the amount of light intensity exposed to a plant affects the amount of photosynthesis the plant performs. I am trying to investigate the affect of light intensity on photosynthesis on a plant. My hypothesis is that as the light intensity on the plant increases, the photosynthesis the plant performs will also rise proportionally. However I also hypothesize that when a certain level of light intensity is reached, the rate of increase will itself decrease. At this point temperature may become a limiting factor, which there is no control of. Light is needed along with Chlorophyll to create a chemical reaction so that this conversion can take place. Without light, this cannot happen, and chlorophyll, found in chloroplasts cannot convert water and Carbon Dioxide. The light comes as light energy and is converted into chemical energy to convert the water and C02 into Glucose and Oxygen, which is just a by-product. Furthermore, because of this, the greater the amount of Light, the more conversion there would be taking place and the quicker it would take place. Because of a greater intensity of light, there would be a greater amount of chemical reaction in the same or smaller amount of time. ...read more.

This could have been caused by a heat problem - mainly caused by the lamp, where the enzymes could be stopping because of false conditions to work in. Also Carbon Dioxide could be in short supply, although I doubt that as the rest of the results are fine. It is one anomaly that is not too identifiable. Overall I think my experiment was very good. It only had one very bad anomaly and also did not show much sign of a limiting factor. The other anomaly could have been because of an error with distance measuring or the fact that there was less area of light because of the shade. It was fairly accurate and there were a few other variables that needed to be regarded as important. However, the experiment did go well, I got more or less the same results each of the four times and the average was accurate. Another way I could do my experiment would be instead, using a light intensity meter to measure the amount of light given to the plant. Also, the bubbles could be collected in a test tube put over the actual beaker. The volume of the bubbles could be measured, and this gives proportion to the size of the bubbles hence giving a more accurate reading of the amount of air. This way, the experiment is more accurate because of the measuring of the volume of air and also the light intensity instead of distance, so a more accurate graph can be produced. ...read more.