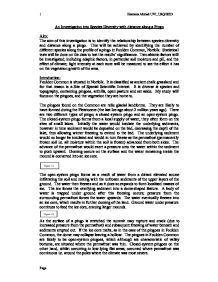 An Investigation into Species Diversity with distance along a Pingo.

An Investigation into Species Diversity with distance along a Pingo Aim: The aim of this investigation is to identify the relationship between species diversity and distance along a pingo. This will be achieved by identifying the number of different species along the profile of a pingo in Foulden Common, Norfolk. Statistical tests will be done on the data to test the results' significance. Two abiotic factors will be investigated; including edaphic factors, in particular soil moisture and pH, and the effect of climate; light intensity at each zone will be measured to see the effect it has on the vegetation growth of the area. Introduction: Foulden Common is situated in Norfolk. It is classified as ancient chalk grassland and for that reason is a Site of Special Scientific Interest. It is diverse is species and topography, containing pingoes, anthills, open pasture and set aside. My study will focus on the pingoes, and the vegetation they are home to. The pingoes found on the Common are relic glacial landforms. They are likely to have formed during the Pleistocene (the last Ice age about 2 million years ago). There are two different types of pingo; a closed-system pingo and an open-system pingo. The closed-system pingo forms from a local supply of water, they often form on the sites of small lakes. Initially the water would insulate the underlying sediments, however in time sediment would be deposited on the bed, decreasing the depth of the lake, thus allowing winter freezing to extend to the bed. The underlying sediment would no longer be insulated and would in turn freeze as the permafrost (permanently frozen soil i.e. all moisture within the soil is frozen) advanced from both sides. The advance of the permafrost would exert a pressure onto the water within the sediment to push upward. Doming occurs on the surface and the water remaining inside the mound is converted into an ice core. ...read more.

This will be done 12 times randomly in each zone using a 35x35cm quadrat and the number of time a species appears in the squares recorded. Soil samples will be taken in each zone and used to measure the pH of the soil and the moisture content of the soil. Five light readings will also be taken in each zone at 1-hour intervals for four hours resulting in 20 readings altogether, these will then be averaged. Soil transects will also be created using an auger which drills into the ground to see the depth of the soil before the bedrock. Statistical tests will be done on the results to see if they are significant or not. The abiotic factors will be used to explain the species diversity of each zone. Changes to method: the following changes had to be made to the method of data collection * The sampling technique changed to save time. Species were counted according to their presence in rows instead of individual squares, therefore instead of examining 49 squares; the individual species were counted in 7 rows. * The sample number was also reduced to 7 instead of 12, because the original was not a feasible number of samples to take considering 10 zones were being examined. * To minimise errors light intensity was taken only at three 1-hour intervals instead of four because the sky became overcast suddenly and therefore the results that would have been taken for the last interval would have affected the average and made the investigation unrepresentative. Results: All raw data has been included in an Appendix at the end of the project together with tables of processed data showing the working of the Simpson's Index working out the species diversity of each zone along the pingo. It must be noted that in working out the species diversity index (Simpson's Index/SDI) bare ground was not included which accounts for the apparent discrepancy in figures of the table and the figures used in the formula. ...read more.

A soil moisture sensor could be used to measure the soil moisture content on the soil in the different zones. This would have been more accurate because the moisture level could be measured on the spot and sol samples needn't have been taken. Repeats could also have been effectively done with the meter and it is a more time-efficient way of measuring the water content of the soil. Taking the original sample number decided on (12) in the preliminary investigation would have improved the accuracy of the results. This was the optimum sample number, whereas using a sample number of 7 may have reduced the SDI value. An extension of the investigation could be to examine the roles of the other abiotic factors affecting the vegetation growth. These include factors such as nitrate levels of the soil, humidity (measured using a hygrometer), oxygen level, and compaction and the level of wind. Instead of looking at a profile of the pingo the effect of aspect on the vegetation growth could also be investigated. The investigation could look at the vegetation growth and species diversity of the pingo throughout the year, for the species diversity is likely to vary in the different seasons. On the whole the investigation, although not completely accurate, obtained fairly good results. Trends in the species diversity were easily identified and the data for abiotic factors supported and justified the SDI values. Although not all of the hypotheses were proved correct, this could be attributed to the fact that the experiment was conducted in a natural environment not in the lab and so there are no 'right' results, instead a variety of factors combined account for the species diversity of an area. Bibliography Waugh, An Integrated Approach Cambridge, Biology 1 Cambridge, Biology 2 W D Phillips, T J Chilton, A-level Biology Fitter, Fitter and Blamey, Collins Pocket Guide of Wild Flowers Biological sciences, Green Stollet and Taylor Table titles for stats Mention prediction of specific species in the conclusion. I.e. ...read more.