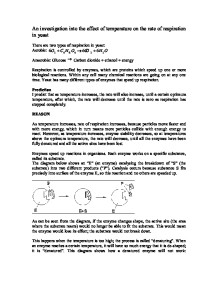 An investigation into the effect of temperature on the rate of respiration in yeast There are two types of respiration in yeast: Aerobic: Anaerobic: Glucose Carbon dioxide + ethanol + energy Respiration is controlled by enzymes, which are proteins which speed up one or more biological reactions. Within any cell many chemical reactions are going on at any one time. Yeast has many different types of enzymes that speed up respiration. Prediction I predict that as temperature increases, the rate will also increase, until a certain optimum temperature, after which, the rate will decrease until the rate is zero as respiration has stopped completely. REASON As temperature increases, rate of respiration increases, because particles move faster and with more energy, which in turn means more particles collide with enough energy to react. However, as temperature increases, enzyme stability decreases, so at temperatures above the optimum temperature, the rate will decrease, until all the enzymes have been fully denatured and all the active sites have been lost. Enzymes speed up reactions in organisms. Each enzyme works on a specific substance, called its substrate. The diagram below shows an "E" (an enzyme) catalysing the breakdown of "S" (the substrate) into two different products ("P"). Catalysis occurs because substance S fits precisely into surface of the enzyme E, so this reaction and no others are speeded up. ...read more.

* Different volumes of water in the water bath will affect how much it changes the temperature of the yeast and glucose mixture. Preliminary experiment: I wanted to see if I needed to make any changes to my experiment, so I carried out the experiment as planned so far, and I got the following results: Temperature (oC) CO2 collected (cm) (Run1) CO2 collected (cm) (Run 2) 20 oC 0 0 31 oC 5 5 41oC 7 6 48 oC 6 7 59 oC 6 5 73 oC 0 0 I did two runs, so I could see anomalies if I got any. During this experiment I noticed that the contents of the test tube where bubbling over into the delivery tube. Another problem was that I could not see the colour of the diazine green in the mixture so it was hard to tell when aerobic respiration had fully stopped. Also as the mixture bubbled over the paraffin had no effect. These are probably the reasons that my results don't show a good trend. This means I am going to have to modify my experiment: Modified Method I will carry out my experiment as I planned before, but I will use 6 drops of diazine green instead of 2, because with 2 drops I couldn't see the colour so I couldn't tell when aerobic respiration had stopped, but should definitely be able to with six. ...read more.

This is a well written report that shows good understanding of the process of an investigation.
1. There are several subheadings missing that would improve the structure of the report.
2. Researched information needs to be directly referenced.
3. The conclusion explains the pattern well but should use data from the investigation to back it up.
4. The evaluation is the strongest section and includes a good amount of detail.
****