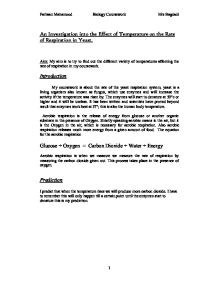 An Investigation into the Effect of Temperature on the Rate of Respiration in Yeast.

An Investigation into the Effect of Temperature on the Rate of Respiration in Yeast. Aim: My aim is to try to find out the different variety of temperatures affecting the rate of respiration in my coursework. Introduction My coursework is about the rate of the yeast respiration system, yeast is a living organism also known as fungus, which use enzymes and will increase the activity if the temperature was risen by. The enzymes will start to denature at 50?c or higher and it will be useless. It has been written and scientists have proved beyond result that enzymes work best at 37?; this is also the human body temperature. Aerobic respiration is the release of energy from glucose or another organic substrate in the presence of Oxygen. Strictly speaking aerobic means in the air, but it is the Oxygen in the air, which is necessary for aerobic respiration. Also aerobic respiration releases much more energy from a given amount of food. The equation for the aerobic respiration Glucose + Oxygen = Carbon Dioxide + Water + Energy Aerobic respiration is when we measure we measure the rate of respiration by measuring the carbon dioxide given out. This process takes place in the presence of oxygen. Prediction I predict that when the temperature rises we will produce more carbon dioxide. ...read more.

6. As soon as you have placed in the conical flask in to the tank start counting the gas bubbles in the first minute of the procedure then note down how many bubbles you have counted and then carry on until the full two minutes have finished and then you note those down also. 7. Once you have completed the experiment of yeast respiration, repeat the whole of the experiment again and again but each time you do the experiment you place the conical flask in a water tank in a temperature of higher than 20?, with the higher temperature the yeast solution will produce more gas bubble, you will see this in the boiling test tube. This will help give more evidence to my results and will help me in my work. The Fair Test To have accurate results and also to improve the results I will complete the same experiment three times each of each temperature, after I have done this I will take an average out of the three results produced and then I will measure the factors, these are yeast and glucose. I hope to keep my results accurate and safe wand hopefully I wish not to produce and anomalies in my graph I will draw for my results table. Safety Measures There are a few hazards in the experiment which will take place some of them are listed below: Yeast is alive and is a ...read more.

Once I did what my instructor asked me to I received valid results and valid information to work along with me. I worked on the experiment with my partner, we both had the same results and prediction and followed instruction as we were told them. Although the results were not to my standards they were valid but not as accurate I hoped them to be. To improve on the next time I might repeat the experiment I should measure the amount of carbon dioxide produced not by counting the bubbles. I think this may have been more accurate than counting bubble as we could actually measure the carbon dioxide and not measure the bubble. In my work I was able to receive valid results and it is sufficient enough to make a valid conclusion. I averaged out my results, my partner decided to complete the experiment four times than we had originally decided which was three per temperature. All the apparatus was wash and ready to use before each experiment took place. While I was drwing out the graph and working I found one anomalie which I though was my fault as I had not read the measuring cylinder properly as I poured the solution (Yeast & Glucose) in it will make a difference in my work. To improve my work next time I will read the right amount of solution of yeast and glucose, I will try different temperatures in the conical flask to warm up in to obtain improved results. Farhaan Mahamood Biology Coursework Mrs Bagdadi 1 ...read more.