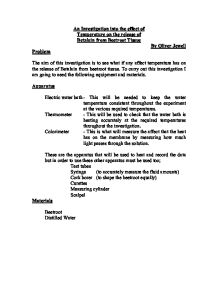 An Investigation into the effect of Temperature on the release of Betalain from Beetroot Tissue.

An Investigation into the effect of Temperature on the release of Betalain from Beetroot Tissue By Oliver Jewell Problem The aim of this investigation is to see what if any affect temperature has on the release of Betalain from beetroot tissue. To carry out this investigation I am going to need the following equipment and materials. Apparatus Electric water bath - This will be needed to keep the water temperature consistent throughout the experiment at the various required temperatures. Thermometer - This will be used to check that the water bath is heating accurately at the required temperatures throughout the investigation. Colorimeter - This is what will measure the affect that the heat has on the membrane by measuring how much light passes through the solution. These are the apparatus that will be used to heat and record the data but in order to use these other apparatus must be used too; Test tubes Syringe (to accurately measure the fluid amounts) Cork borer (to shape the beetroot equally) Curettes Measuring cylinder Scalpel Materials Beetroot Distilled Water Method Cut out three pieces of beetroot about 2cms long using a cork borer. Place the cylinders of beetroot on a tile or board and using the scapulae cut into discs 5mm thick. Label 3 test tubes, A B & C for each of the temperatures to be tested. The temperatures required are 20, 30, 40, 50, 60, 70 and 80�c Put 10cm� of distilled water in each test tube Place the three test tubes for the required temperature in the water bath and heat to the required temp if needed Check the required temp has been reached using the thermometer to measure both the water bath and the test tubes temps Place the three pieces of beetroot in the three test tubes and leave for two minuets After the time is over remove the test tubes from the water bath and using the syringe which should be clean, extract 5cl from each solution to fill up ...read more.

After the averages have been recorded graphs can be drawn up and then analysed for correlation or anomalous results. Scientific theories can then be used to explain the results and then conclude the investigation. Changes in Method There were some problems whilst collecting the results which may have an affect on the findings from them. Firstly was with the temperatures of the water baths which we heated the beetroot in; these were less reliable than I had hopped as far as keeping the water at a consistent temperature. They could not hold the water at exactly 35�C, 45�C, 55� or 65�C etc so temperatures were recorded from around the right temperature, and that temperature recorded with them. I would also have liked the water baths to be as consistent as possible but I'm not sure they were as once they reached the required temperature they turned off. This may mean that the temperatures varied slightly over the five minuet period the beetroot was left to diffuse, however I still feel that the temperatures recorded are varied enough and close enough to the original aims to still be used to analyse and solve the problem. The Colorimeter's readings may also have an affect on the results. This is because they did not always read consistently. This could be because of smudges on either on the curettes or on the lens or perhaps due to the particles moving around in the solution. I feel, however that the data collected has been accurate enough and varied enough to analyse and solve the problem fairly. I also found that two minuets did not prove a sufficient amount of time for the diffusion to take place, and so I extended the time to 10 minuets. This is because I found that I had underestimated the rate of diffusion from the beetroot and that after just 2 minuets not very much dye had diffused at all and comparisons would be small. ...read more.

There would then be no heat or buffer to keep the temperature constant. Whilst this is a much more effective and accurate way of reaching the temperatures and conducting the experiment than using Bunsen burners or any of the other equipment the school could have provided, it was a bit disappointing that it couldn't hold its temperature. The poor precision of the water bathes could have had an effect on the data recorded. The experiments were supposed to be conducted at 25, 35, 45, 55 and 65�C but the real temperatures were from around these temperatures. This could have led to variation in the in the in the data collected as some of the error bars were quite large, for instance the changing temperatures could mean that once you returned to repeat the experiment the water bath would be at a different temperature to when you first recorded the results. Another factor affecting the difference in results could the position in the water bathe, if two different thermometers (the water bathes thermostat and the separate thermometer) are reading different temperatures then maybe the temperature isn't consistent throughout the water bathe at the same time. If one test tube was placed directly above the heater and another away from it they would have different temperatures leading to a deviance in the results. This lack of reliability may have had an effect on the conclusions as well as the results. On the first graph the error bars were clearly to large and needed editing to remove the anomalies and redo a more consistent line. The figures used for the graphs were suppose to be for the rate of reaction and to work this out the diffusion should have been constant, but if the temperatures weren't constant then its probable that the diffusion wasn't either. This could not be helped though and differences - although there were some anomalies were fairly consistent and showed enough reliability to be analysed, concluded and explained using Biological Knowledge. ...read more.