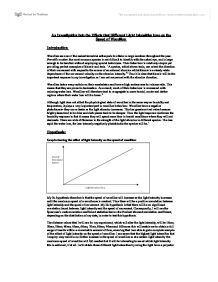 An Investigation into the Effects that Different Light Intensities have on the Speed of Woodlice:

An Investigation into the Effects that Different Light Intensities have on the Speed of Woodlice: Introduction: Woodlice are one of the easiest terrestrial arthropods to obtain in large numbers throughout the year. Porcellio scaber, the most common species is not difficult to identify with the naked eye, and is large enough to be handled without employing special techniques. Their behaviour is relatively simple yet providing perfect examples of kinesis and taxis. i A species, which shows taxis, can orient the direction of their movement with respect to the source of an external stimulus whilst kinesis is a steady-state dependence of the movement velocity on the stimulus intensity.iii Thus it is clear that kinesis will be the important response in my investigation as I am not concerned with the stimulus direction. Woodlice lack a waxy cuticle on their exoskeleton and have a high surface area to volume ratio. This means that they are prone to desiccation. As a result, much of their behaviour is concerned with reducing water loss. Woodlice will therefore tend to congregate in more humid, cooler and darker regions where their water loss will be lower.ii Although light does not affect the physiological state of woodlice in the same way as humidity and temperature, it plays a very important part in woodlice behaviour. Woodlice have a negative photokinesis- they move faster as the light stimulus increases. This has great survival value because bright places tend to be drier and dark places tend to be damper. Thus the light response reinforces the humidity response in that it means they will spend more time in humid conditions where they will not desiccate. There are wide differences in the strength of the light stimulus in different species. The less rapid the water loss, the less intensely negatively photokinetic the species will be.i Hypothesis: Graph showing the effect of light intensity on the speed of woodlice: My HA hypothesis therefore is that the speed of woodlice will increase as the light intensity increases until the maximum speed of a woodlouse is reached. ...read more.

Thus in my actual experiment I intend to use only 5 woodlice at each light intensity rather than 10 in order to reduce the likelihood of them crossing paths. Last of all, I found that when I moved the light right down to the smallest distance of 10cm, it blocked the view of the camera just like it had done when employing the fixed camera. Therefore, I simply decided to only record results down to a distance of 20cm where the camera view was not obscured. The Investigation: A large number of woodlice were collected. These were then placed in a long-term culture container, which had potatoes with holes in them, in the bottom to help retain moisture as well as some vegetation and compost in order to mimic the woodlice's natural habitat. After having collected the woodlice, the apparatus was set up as shown in the diagram. All the electrical equipment was switched on in order to check that it was all connected correctly and that it was working. At first, the picture on the camera would not come up on the television. However, after a good check of all the equipment, I realised that the video recorder was on the wrong channel. The correct channel was then found - AV1- and consequently, the camera picture appeared on the television screen. The light was then adjusted to the first distance of 100cm. Both the light intensity and humidity were then recorded using the light and humidity probes, which were connected to a 'check it' system that displayed the values. The humidity and light probes were secured using tape, so that they remained in a fixed place and at the same angle throughout the investigation. The temperature was also checked using the thermometer. Once all relevant variables had been recorded, 5 woodlice, of similar size and of the same species, were taken from the long-term culture container and transferred carefully to a small glass container with damp cotton wool in the bottom. ...read more.

Moreover, I would have liked to use a wider range of light intensities. In particular, it would have been interesting to have done some readings at even higher light intensities to see whether the speed of the woodlice would still increase or whether a maximum speed would be reached as already suggested by my results. It would be interesting to know at exactly what light intensity this point was reached. Furthermore, carrying out more readings at the light intensities, which produced the most error, would have been a good idea. For example, reading number 7,at a light intensity of 210 lux, showed significantly more error than any other reading. It would have been interesting to check this reading by using a larger number of woodlice. ii Woodlice, Stephen Sutton, 1972 ii www.geocities.com/~gregmck/woodlice I do not know exactly why this was but I suggest, after looking at my results, that it was a result of woodlice 1 and 5 clumping together for a significant amount of time and therefore producing much lower speeds relative to speeds 2, 3 and 4. This is because they did not travel as far and this therefore increased the variability at that light intensity. After carefully studying my results, it is clear that at almost all light intensities this becomes a factor with one or two readings out of the 5, being significantly lower than the rest of the readings. I have coloured these readings in red in my results table. From looking at my graph and the results of my statistical test it is true to say that the HA hypothesis: that the speed of movement would increase as the light intensity increases is correct given that the rs value is significantly above 0.68 at a probability of 0.05. In fact, the rs value of 1 shows that there is a perfect correlation, indicating that my results are very reliable. Also, the graph matches almost exactly the graph that I drew in my hypothesis, both showing the clear positive correlation between light intensity and the speed of movement. ?? ?? ?? ?? ...read more.

The student has answered the question really well with everything being present in the essay that is needed, the scientific explanation and layout is to a very high standard.

The student has answered the question really well with everything being present in the essay that is needed, the scientific explanation and layout is to a very high standard.

The extensive reasoning behind the hypothesis is a feature not normally seen at this level of work, this really gives the reader an insight into why the student has come up with the hypothesis that they did. The fact that the control variables have been placed in a table it makes it very easy to read which will allow the examiner to find the marks easier. The fact that all of the equipment has an explication is a very high level skill that I have only just grasped this skill as somethings are obvious why you would need them! It is also a logical progression through the investigation as you can see how one section leads on to the next.

The student has followed the conventions expected at this level and at some points they have exceeded them, the only improvement that I could suggest would be to include a null hypothesis, this is basically a hypothesis that says that your tested variable will have no effect on the test subject. The spelling grammar and scientific language are all to a very high standard.