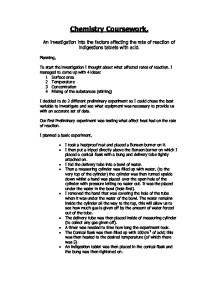 An investigation into the factors affecting the rate of reaction of indigestions tablets with acid.

Chemistry Coursework, An investigation into the factors affecting the rate of reaction of indigestions tablets with acid. Planning, To start the investigation I thought about what affected rates of reaction. I managed to come up with 4 ideas: 1 Surface area 2 Temperature 3 Concentration 4 Mixing of the substances (stirring) I decided to do 2 different preliminary experiment so I could chose the best variable to investigate and see what equipment was necessary to provide us with an accurate set of data. Our first Preliminary experiment was testing what affect heat had on the rate of reaction. I planned a basic experiment, * I took a heatproof mat and placed a Bunsen burner on it. * I then put a tripod directly above the Bunsen burner on which I placed a conical flask with a bung and delivery tube tightly attached on. * I fed the delivery tube into a bowl of water. * Then a measuring cylinder was filled up with water, (to the very top of the cylinder) the cylinder was then turned upside down whilst a hand was placed over the open hole of the cylinder with pressure letting no water out. It was the placed under the water in the bowl (hole first). * I removed the hand that was covering the hole of the tube when it was under the water of the bowl. The water remains inside the cylinder all the way to the top, this will allow us to see how much gas is given off by the amount of water forced out of the tube. * The delivery tube was then placed inside of measuring cylinder (to collect any gas given off). * A timer was needed to time how long the experiment took. * The Conical flask was then filled up with 100cm3 of acid; this was then heated to the desired temperature (of which there was 5). ...read more.

Method, For the real experiment I decided to collect the gas given off up to 70ml, although our preliminary results didn't reach 70ml given off I knew that when the experiment was done accurately with the right amounts of the substance (100 ml of acid and a full tablet) all of the results would be able to reach 70ml (I also knew this as others using full tablets were all getting in excess of 70ml). In the preliminary experiment only half tablets were used and only 50 ml of the acid were added which may not have produced all the gas required to reach 70ml although the tablet had dissolved indicating all tablet was used up. I changed it so 100 ml of acid were added not 50ml and a whole tablet was used this meant the variable of surface area can be kept constant through out the experiment as cutting may result in either 2 lumps of tablet being used as a half. Or simply the cut may go in a different angle revealing more tablet area to the acid. Also through the preliminary experiment I discovered that a measuring cylinder was not very accurate as the markings are not as accurate as the burette. I therefore, used a burette for both water and acid in the experiments to create the concentrations. * Take a burette and fill it up with acid, make sure it fills up to the zero (if not drain until at zero), otherwise extra or not enough acid may be filled into the beaker. * Measure 5 different amounts of acid into 5 separate beakers (20ml, 30ml, 40ml, 50ml and 60ml) by slowly letting the acid go drain into the beaker from the burette (stopping the acid when it reaches the desired amount released). These concentrations were used in the preliminary experiment and provided a good range of results (a quite low concentration - 20% and a reasonably high concentration - 60%). ...read more.

This down through human error, there is no way you will be able to say for example stop the stopwatch as soon as the reaction has finished because the signs I look for a quite inaccurate - observe the stopping of carbon dioxide being release and the tablet no longer being visible therefore, to use split seconds for times accuracy would be ridiculous. I am pleased with my method and believe that it was definitely sufficient to obtain the evidence I needed to prove my prediction right. It allowed me to make concentrations that were of a good accuracy that is essential to this investigation. The reliability of my results I would say is extremely good; when I compare all 3 graphs I can see that the gradient for each one is basically exactly the same. The quality of the real experiment and the repeats was I think, very good, I can see that in both experiments they reached almost exactly the same rate for each point (even the preliminary results show good correlation with the 2). A variable that affects quite a lot was not considered enough during my experiments. I can see that from my very first preliminary test (on temperature) that temperature is very significant to the rate of reaction. Although I completed each experiment on the same day (1st experiment one day repeats another) at the same time the temperature may have varied per concentration due to a sudden change in temperature. However this would probably not have been enough to affect our results considerably but taking the temperature before each concentration test would have been good as it might have explained so anomalous results or at least may show you if the temperature has an affect on the rate when it is varied within a few degrees. So in conclusion if I were to extend my investigation I would use a thermometer to measure the temperature in future before the reaction takes place and I would also vary the temperatures from 50% to 90% at 5% intervals to see what happens around this area in more detail. ...read more.