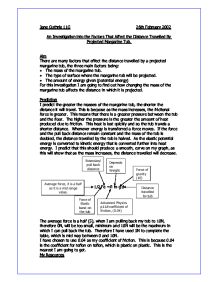 An Investigation into the Factors That Affect the Distance Travelled By Projected Margarine Tub.

An Investigation into the Factors That Affect the Distance Travelled By

There are many factors that effect the distance travelled by a projected margarine tub, the three main factors being:

For this investigation I am going to find out how changing the mass of the margarine tub affects the distance in which it is projected.

I predict the greater the masses of the margarine tub, the shorter the distance it will travel. This is because as the mass increases, the frictional force is greater.  This means that there is a greater pressure between the tub and the floor.  The higher the pressure is the greater the amount of heat produced due to friction.  This heat is lost quickly and so the tub travels a shorter distance.  Whenever energy is transferred a force moves.  If the force and the pull back distance remain constant and the mass of the tub is doubled, the distance travelled by the tub is halved.  As the elastic potential energy is converted to kinetic energy that is converted further into heat energy.

The first table is the table in which I am going to use, but I am also going to use the second table to base my graph on, as it is a lot simpler.

If the experiment was to be repeated, I would not use just stools as we found out that they kept slipping because they were too light.  Therefore, I would suggest using stools again but have a person sitting on each stool to make sure it wouldn't move.  If this was to be done, you would have to make sure that the people who were sitting on the stool are of similar weights too make sure it remains a fair test.

In our experiment we had a few anomalous results (as highlighted).  This could be due to the following reasons:

I think it would also be beneficial to do more repeats to allow for all the anomalous results.