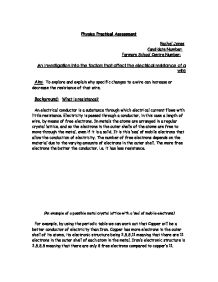 Aim:  To explore and explain why specific changes to a wire can increase or decrease the resistance of that wire.

An electrical conductor is a substance through which electrical current flows with little resistance. Electricity is passed through a conductor, in this case a length of wire, by means of free electrons. In metals the atoms are arranged in a regular crystal lattice, and so the electrons in the outer shells of the atoms are free to move through the metal, even if it is a solid. It is this ‘sea’ of mobile electrons that allow the conduction of electricity. The number of free electrons depends on the material due to the varying amounts of electrons in the outer shell. The more free electrons the better the conductor, i.e. it has less resistance.

For example, by using the periodic table we can work out that Copper will be a better conductor of electricity than Iron. Copper has more electrons in the outer shell of its atoms, its electronic structure being 2,8,8,11 meaning that there are 11 electrons in the outer shell of each atom in the metal. Iron’s electronic structure is 2,8,8,8 meaning that there are only 8 free electrons compared to copper’s 11.

When the free electrons in a wire are given energy, they have the ability to move and collide with neighbouring free electrons. This happens across the length of the wire, and so electricity is conducted.

I observed that both the readings on the voltmeter or ammeter were not precise measurements, and kept flicking from one number to another, so I used the first reading, as I thought that this would be when the wire would be least affected by temperature, and then worked out the average (as shown above) from the three tests.

I was not able to obtain accurate results from the 10cm length of wire as the wire became very hot very quickly, so, as this would invalidate the results, I decided not to include it in my findings.

There were no obvious errors in my experiment.

In view of my results and the graph I was able to construct from them, I have made the following conclusions:

From my analysis, I can confidently say that my prediction was correct. From studying the manner in which electricity is conducted, one can explain why the length of a wire is directly proportional to the resistance.

The number of freely mobile electrons in a given length of wire will produce a specific amount of resistance. This is because as a current is passed through the conductor the electrons in the outer shells of the particles are given energy so that they can move. As they travel through the wire, they come into contact with impurities in the conductor, other particles and any immobile material with which they ‘bump’ into.

There were a few mistakes in my experiment, mainly caused by carelessness in the storage of the materials used:

Although there were a few mistakes in this experiment, on the whole I do believe that they provided me with a good basis for my conclusions.