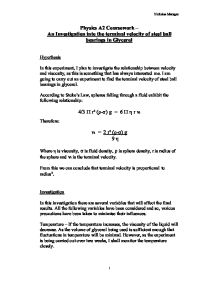 An Investigation into the terminal velocity of steel ball bearings in Glycerol.

In this experiment, I plan to investigate the relationship between velocity and viscosity, as this is something that has always interested me. I am going to carry out an experiment to find the terminal velocity of steel ball bearings in glycerol.

According to Stoke’s Law, spheres falling through a fluid exhibit the following relationship:

Where η is viscosity, σ is fluid density, ρ is sphere density, r is radius of the sphere and vt is the terminal velocity.

From this we can conclude that terminal velocity is proportional to radius².

In this investigation there are several variables that will affect the final results. All the following variables have been considered and so, various precautions have been taken to minimise their influences.

Temperature – If the temperature increases, the viscosity of the liquid will decrease. As the volume of glycerol being used is sufficient enough that fluctuations in temperature will be minimal. However, as the experiment is being carried out over two weeks, I shall monitor the temperature closely.

Viscosity – The internal friction in the liquid (viscosity) will have to be constant throughout the experiment.

The micrometer was used to accurately measure the diameter of the steel ball bearings. The ball bearing was held above the glycerol and released. Once the ball bearing had fallen to the bottom they were retrieved by using a magnet on a length of thread.

The results were as follows:

The tables show the time taken in seconds for the ball to fall ten centimetres, over four different attempts. I had some other ball bearing, but they were much bigger and so fell much faster.

From these results I concluded that the ball bearings of radius 3.18 mm were to be used for the experiment. They travelled sufficiently slowly to be timed accurately and should also reach terminal velocity over a small distance.

The readings that were taken were used to calculate average time taken and average speeds for this experiment.

I carried out a few more experiments with different sized balls (similar diameter to 3.18 mm, as we have already stated that much bigger balls fall too fast to time accurately), so that we can draw a chart to show the relationship between terminal velocities and radius. 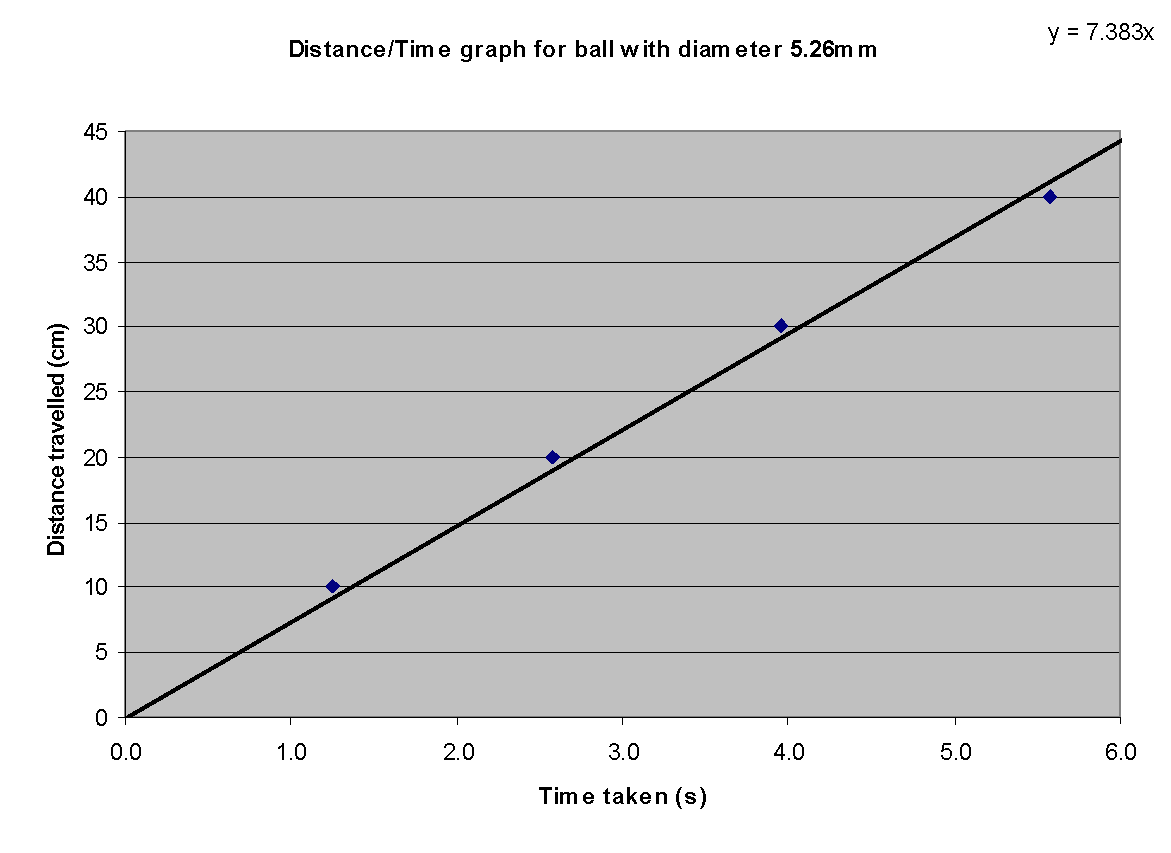 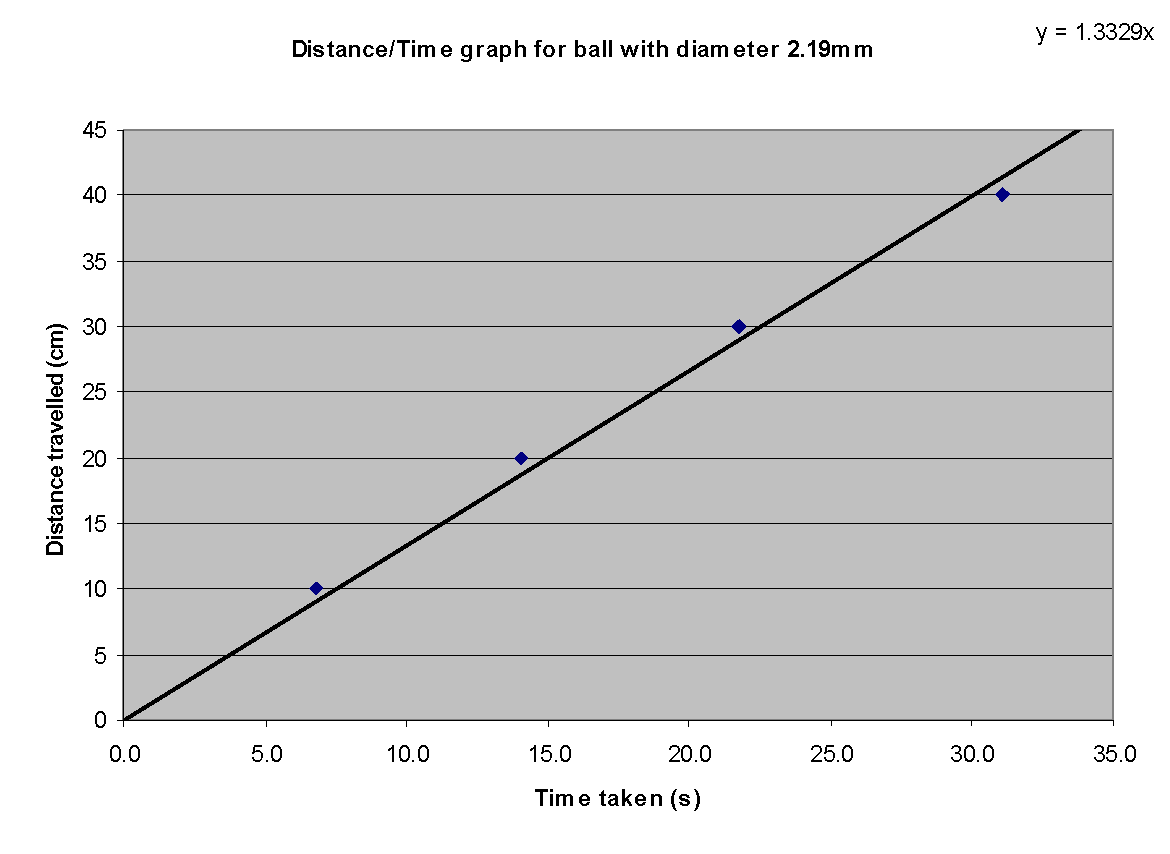 All the graphs show a linear trend line. So, if we count the average speed as the terminal velocity, we can show the following relationship. 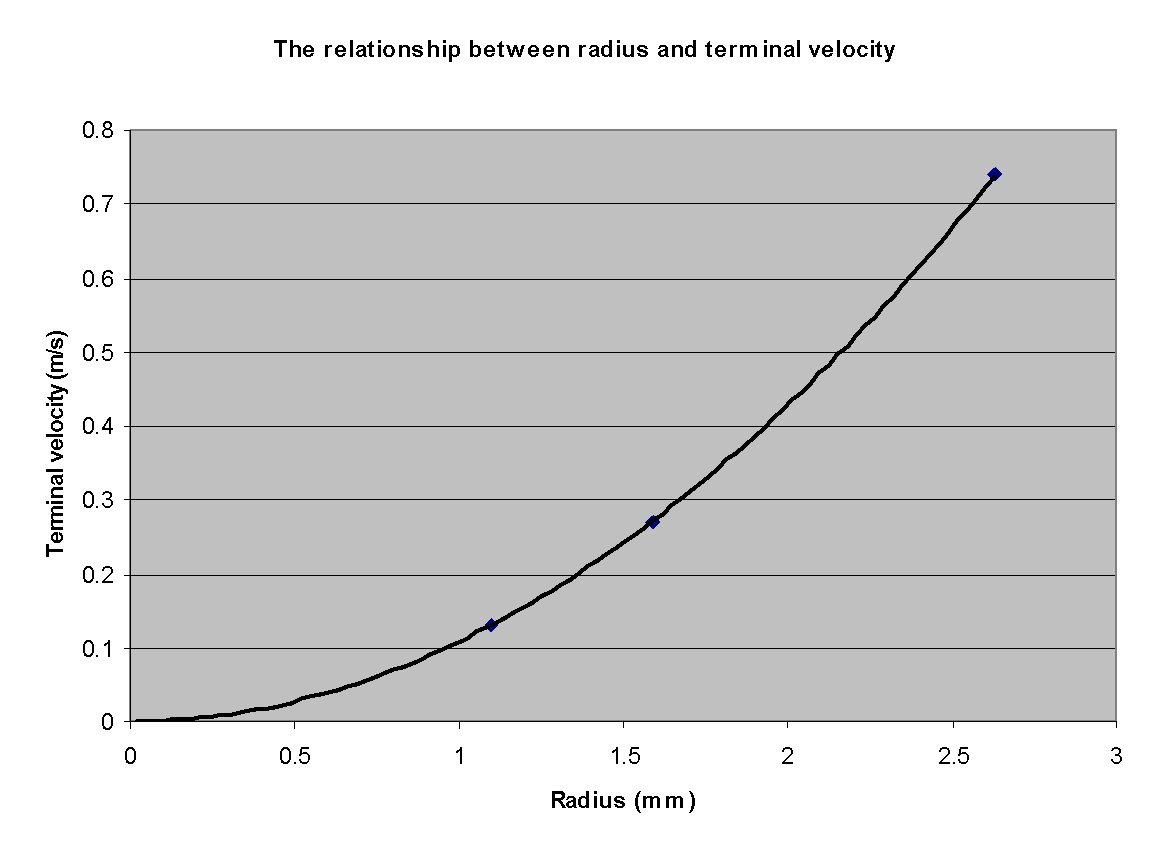 My first prediction was that terminal velocity was proportional to radius squared. 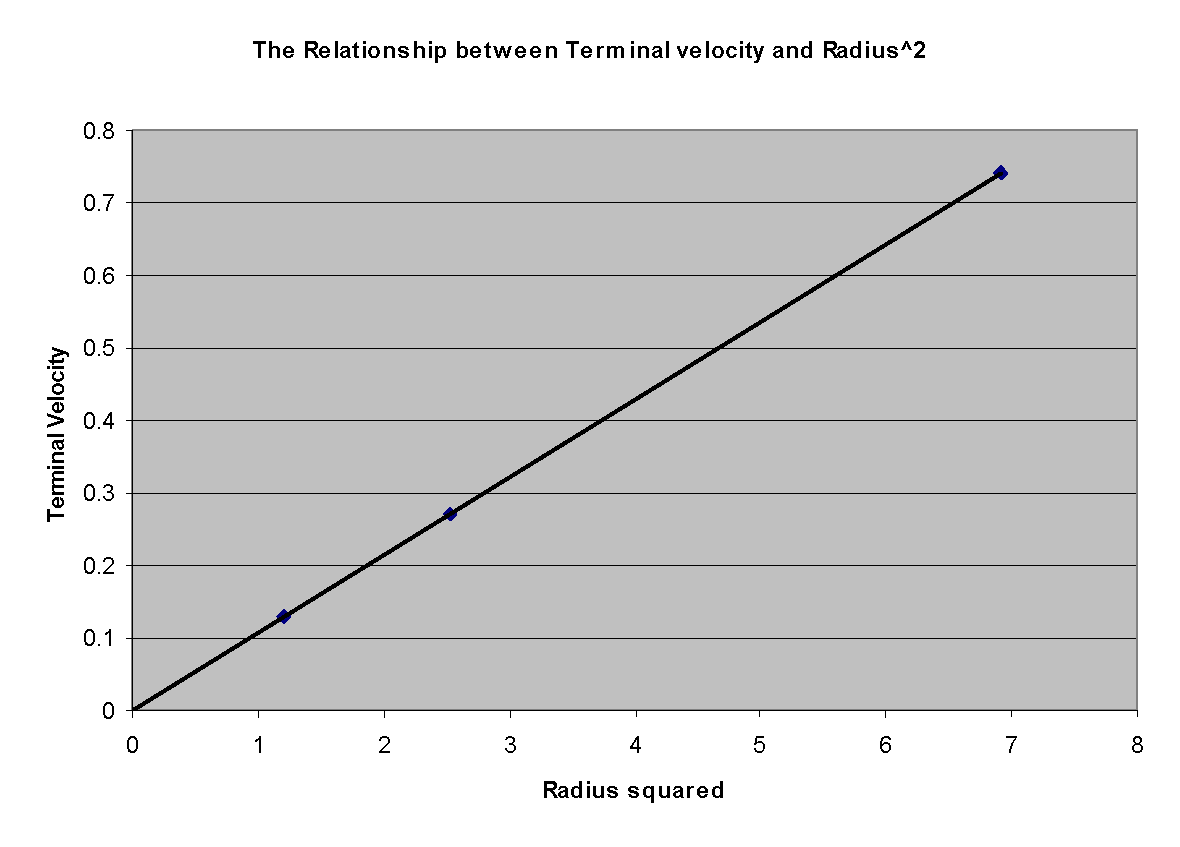 This graph clearly shows a straight trend line that passes through the origin. This proves that the terminal velocity is directly proportional to the radius squared.

This theory was proven with a line of best fits, but it is clear from the graphs that the points lie above and below the line, which means that there are inaccuracies. The inaccuracies lie in the timing of the balls. If I were to do this experiment again, I would look at trying to make the readings more accurate.

Talk about experiments with varying temperature