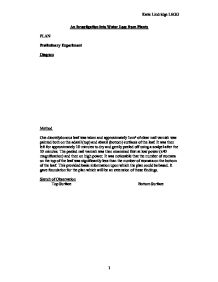 An Investigation into Water Loss from Plants.

An Investigation into Water Loss from Plants PLAN Preliminary Experiment Diagram Method One dicotelydonous leaf was taken and approximately 1cm� of clear nail varnish was painted both on the adaxil (top) and abaxil (bottom) surfaces of the leaf. It was then left for approximately 10 minutes to dry and gently peeled off using a scalpel after the 10 minutes. The peeled nail varnish was then examined first at low power (x40 magnification) and then on high power. It was noticeable that the number of stomata on the top of the leaf was significantly less than the number of stomata on the bottom of the leaf. This provided basic information upon which the plan could be based. It gave foundation for the plan which will be an extension of these findings. Sketch of Observation Top Surface Bottom Surface Conclusion It can be concluded that there appears to be more stomata on the bottom of the leaf indicating that there may be more chance for transpiration from this area. Scientific Knowledge Diagram of Leaf Each leaf on a plant is comprised of layers as shown above which are not tightly compact and instead have many air spaces necessary for gaseous exchange (to allow exchange of carbon dioxide and oxygen for photosynthesis and respiration). The air in the internal spaces of the leaf has direct contact with the outside air through the stomata. If there is a higher concentration of water vapour within the leaf than there is in the outside air a diffusion gradient will be created and water vapour can diffuse out of the leaf through the stomata, this process is transpiration. The rate of transpiration will vary in different climatic conditions as this will influence the concentration of water vapour in the air. The higher the humidity of the air the higher the water concentration in it so the concentration gradient will be lower leading to a low rate of transpiration. ...read more.

Using the percentage change eliminates this from the results. * A graticule is used to measure the stomata, which is much more accurate than simply counting them as the actual amount of stomata in a certain area could be found. * 4 leaves are examined under the microscope to find an average number of stomata. * 5 repeats are performed for each condition so an average can be taken to may the results more accurate and representative of the all privet leaves. * A control in the form of untreated shoots (all in rack 1) is set up so that the results can be compared to a 'normal' shoot so the effects of treatment can be seen. * All shoots are from the same part of the same bush to ensure continuity and eliminate unnecessary room for error. This may happen if completely different leaves are used as they may have a different number of stoma or the stoma on a different surface. Shoots from the bottom of a bush may have a different amount of stomata than those from the top which would leave room for error in results. Taking all shoots from the same place eliminates this variation. * Test tubes are organised and labelled and placed in labelled racks to avoid confusion and maintain accuracy of the results. * The environment in which the experiment is carried out is constant and the same for all shoots. This eliminates other factors which may cause variation in the rate and amount of transpiration. * Statistics (T test) will be used to test the results accuracy to further ensure the reliability of the results. Sample results table: Number of Shoot Original Mass (g) Mass after 24 hours (g) Mass after 48 hours (g) Difference in mass (g) Percentage mass lost (%) 1 2 3 4 5 6 7 8 9 10 11 12 13 14 15 16 17 18 19 20 Safety Precautions * Goggles: To protect eyes from Vaseline and blunt instrument (spatula). ...read more.

7 days would be much more accurate than just 2. Repeats of all readings would also improve the accuracy as an average could be taken providing a more reliable result. The graticule method of finding the view area and how many stomata in that area is quite inaccurate as human error in counting large numbers of stomata could easily occur. To improve this many different areas of the leaves should be examined under the microscope and the number of stomata counted and an average per mm� examined found. This would make the number more accurate and representative of the whole leaf. The prediction, scientific knowledge and microscope findings all indicated that there would be no, or an insignificant amount of, water lost from the top surface of the leaf. However the percentage mass lost showed that an average of 2.376% of the leaf's mass was lost through the top surface. This could be due to areas on the bottom surface being missed when the leaf was being covered with Vaseline, meaning that stomata on the bottom were exposed and water could have been lost from the bottom surface. It is likely that although the microscope found none there are a few stomata on the top surface of the leaf allowing water to be lost from the top surface. It is also likely that the uncovered lenticels on the petiole accounted for a certain amount of the mass lost, these should have been blocked using Vaseline. Although there were many limitations the results were not extremely distorted as all leaves had been under the same conditions so most limitations affected all of them. The only shoots that can be considered affected were shoots 4, 14 and 19 which gave anomalous results. The T Test showed that it was more than 5% likely that the results were down to chance rather than the result of scientific occurrences. With the suggested improvements the accuracy may be improved and the results may become significant. Katie Lindridge L6GG 1 ...read more.