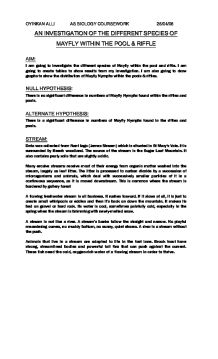 AN INVESTIGATION OF THE DIFFERENT SPECIES OF MAYFLY WITHIN THE POOL &amp; RIFFLE

AN INVESTIGATION OF THE DIFFERENT SPECIES OF MAYFLY WITHIN THE POOL & RIFFLE AIM: I am going to investigate the different species of Mayfly within the pool and riffle. I am going to create tables to show results from my investigation. I am also going to draw graphs to show the distribution of Mayfly Nymphs within the pools & riffles. NULL HYPOTHESIS: There is no significant difference in numbers of Mayfly Nymphs found within the riffles and pools. ALTERNATE HYPOTHESIS: There is a significant difference in numbers of Mayfly Nymphs found in the riffles and pools. STREAM: Data was collected from Nant Iago (James Stream) which is situated in St Mary's Vale. It is surrounded by Beech woodland. The source of the stream is the Sugar Loaf Mountain. It also contains peaty soils that are slightly acidic. Many erosive streams receive most of their energy from organic matter washed into the stream, largely as leaf litter. The litter is processed to carbon dioxide by a succession of microrganisms and animals, which deal with successively smaller particles of it in a continuous sequence, as it is moved downstream. This is common where the stream is bordered by gallery forest A flowing freshwater stream is all business. It rushes forward. If it slows at all, it is just to create small whirlpools or eddies and then it's back on down the mountain. It makes its bed on gravel or hard rock. Its water is cool, sometimes painfully cold, especially in the spring when the stream is brimming with newly-melted snow. A stream is not like a river. A stream's banks follow the straight and narrow. No playful meandering curves, no muddy bottom, no sunny, quiet shores. A river is a stream without the push. Animals that live in a stream are adapted to life in the fast lane. Brook trout have strong, streamlined bodies and powerful tail fins that can push against the current. ...read more.

Then I had to get the ruler to measure the depth of the pool. Once all the measurements for the pool had been recorded, I had to select another pool at random. Then I had to repeat the above process for this pool. I had to make sure that at the end of it I remembered to take the ph and velocity readings, also the depth of the pool. I had to repeat the process for the remaining four pools selected at random. Making sure I recorded the ph, velocity and depth readings. Then I had to move on to the riffles. I had to randomly select the riffle I would be collecting data from. Once I had selected the riffle I would be working in I had to fill the two trays with water. Then I had to get the Serber net and place it at the mouth of the riffle. Once I had done that, I had to disturb the sediment by rubbing the substrate for three minutes. Once the three minutes was finished, I had to place the net in on of the trays and empty the invertebrates into it. I then had to get the spoon and pick out the mayflies in the midst of the invertebrates. Once I had identified the mayflies I had to place them in the other tray. As I identified the different species of mayflies, I had to make a tally chart on my recording sheet. Once I had finished picking out the mayflies in the tray, I had to pour both trays of water and invertebrates back into the stream. Then I had to get the ph pen and record the readings of the ph and temperature. To do this I had to place the ph pen in the midst of the riffle and hold it for five minutes before I recorded the reading. ...read more.

had an impact on the flow of water as it had increased from when I did my preliminary sampling, which was the previous day. If I was to do this investigation there are many improvements and adjustments I would make sure I achieved the most accurate results. The collection of data would have to be spread over two days, that way I would have more time to collect the data without the hassle of rushing at the last minute just make sure I had the correct results. Time constrictions would also increase by 5 minutes to be sure that I had identified all the invertebrates within the trays. The identification key would have to be changed so that I could identify the species as accurate as possible. I would also make sure that I cleared some of the leaves from the stream just to make sure that none of the invertebrates were clinging to them. The time of disturbance could be increased so that more invertebrates could find their way into the net. That way there would be more invertebrates to collect and identify taking into account the holes in the net. The equipment would have to be updated and scientific so that the results gathered were as accurate as possible Also I could have had more intervals between the gatherings of data to make sure that I was putting in the same amount of effort into each site. I could also have extended my investigation by collecting data in two or more pools and riffles. CONCLUSION Overall my investigation shows that I had to accept the null hypothesis; there was no significant difference in the number of mayfly nymphs found within the riffles and pools. It also shows that there no Ephemerellidae was found in both pools and riffles. Also it shows that the velocity flow levels changed the results of the number of mayflies found. That shows that the high water levels which might be seasonal, affect the velocity. There were also a few errors in the results for the distribution of mayfly nymphs within the riffles and pools. ...read more.

****
A quite complex investigation reported in full but analysis & evaluation could be more detailed. One significant mistake in the statistical analysis.