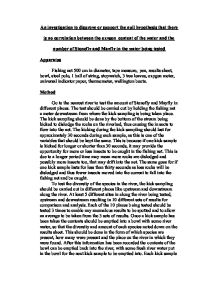 An investigation to disprove or support the null hypothesis that there is no correlation between the oxygen content of the water and the number of Stonefly and Mayfly in the water being tested Apparatus Fishing net 500 cm in diameter, tape measure, pen, results sheet, bowl, steel pole, 1 ball of string, stopwatch, 3 tree leaves, oxygen meter, universal indicator paper, thermometer, wellington boots. Method Go to the nearest river to test the amount of Stonefly and Mayfly in different places. The test should be carried out by holding the fishing net a meter downstream from where the kick sampling is being taken place. The kick sampling should be done by the bottom of the stream being kicked to dislodge the rocks on the riverbed, thus causing the insects to flow into the net. The kicking during the kick sampling should last for approximately 30 seconds during each sample, as this is one of the variables that should be kept the same. This is because if one kick sample is kicked for longer or shorter than 30 seconds, it may provide the opportunity for more or less insects to be caught in the fishing net. This is due to a longer period time may mean more rocks are dislodged and possibly more insects too, that may drift into the net. The same goes for if one kick sample lasts for less than thirty seconds as less rocks will be dislodged and thus fewer insects moved into the current to fall into the fishing net and be caught. To test the diversity of the species in the river, the kick sampling should be carried out in different places like upstream and downstream along the river. At least 5 different sites in along the river being tested, upstream and downstream resulting in 10 different sets of results for comparison and analysis. Each of the 10 places being tested should be tested 3 times to enable any anomalous results to be spotted and to allow an average to be taken from the 3 sets of results. ...read more.

The temperature should be noted down with this being carried out 3 times for each area tested so that it is a fair test and so that any anomalous results can be spotted. If there are any anomalous results they should tend to stick out against the pattern of the other two and they can be dealt with by either being left out of the end results or being included in the average to reduce their significance. Safety/environmental aspects When carrying out the investigation near the river, it may be important to consider not to leave any litter or rubbish lying around, as it may damage the environment and habitats of some of the animals like otters that have habitats in or near a river environment. It may also be important to try to leave everything as it was found in the first place, again to avoid changing the habitat and environment of any animals that may harm them in anyway. Waterproof and sturdy footwear may be worth using especially when carrying out the kick sampling, as this could be in relatively deep water so if the foot wear used is waterproof, peoples feet may stay dry as oppose to getting wet. As the kick sampling involves moving rocks using feet having sturdy footwear could be a good idea, due to this causing the feet of people carrying out the investigation to be protected in the case of some of the rocks falling directly onto a persons foot. If standard footwear without any form of protection is used, injuries to people's feet could be incurred were rocks to fall on them, so waterproof strong footwear like wellington boots should be used. Small children should be kept away from near the edge of the water, due to some parts of the river being quite deep and only 2 centre meters of water are needed to drown anyone. ...read more.

Subsequently an increased amount of oxygen allows certain species to thrive more, as they can produce more ATP that can be broken down to release energy. Consequently if one species thrives more in more oxygenated parts of the river this chemical factor could have an effect on the diversity in this part of the river. Due to the amount of oxygen present could effect the biotic factors of the environment that Stonefly, Mayfly and other species live in. This could be because if a certain species thrives more than other species, the food present in the particular environment where the Stonefly for example are thriving could decrease dramatically. This could cause the inter specific competition to increase as well as the intra specific competition of the insects in a certain environment as more nutrients may be used up by the thriving species due to the increased oxygen content in the water, which is a factor that may not be able to be controlled due to certain areas having warmer water and air surrounding them. Repetition Any results taken in this experiment should be repeated 3 times for each result taken. This is so that if any anomalous results are present it may show up against the trend of the other two results. For example the width of the river was being measured and results one and two were 322 cm and the third result was 343 cm. It may become apparent that the third result was anomalous because it was 23cm of off results one and two. Once an anomalous result has been identified by this method it is possible to use all three results gathered to take an average and reduce the significance of the anomalous result. Or the anomalous result could be left out of the average if it is so far adrift from the other two results gained, as may be apparent in this case due to 23cm being 7.14% of 322cm. It can be said that this is quite a large difference and could have too significant an effect on the average were it to be included. ...read more.