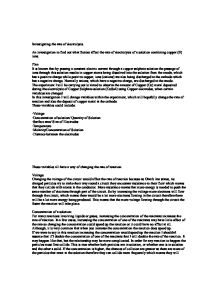 An investigation to find out what factors affect the rate of electrolysis of a solution containing copper (II) ions.

Investigating the rate of electrolysis. An investigation to find out what factors affect the rate of electrolysis of a solution containing copper (II) ions. Plan It is known that by passing a constant electric current through a copper sulphate solution the passage of ions through this solution results in copper atoms being dissolved into the solution from the anode, which has a positive charge while positive copper, ions (cations) are also being discharged at the cathode which has a negative charge. Normally anions, which have a negative charge, are discharged at the anode. The experiment I will be carrying out is aimed to observe the amount of Copper (Cu) metal deposited during the electrolysis of Copper Sulphate solution (CuSo4) using Copper electrodes, when certain variables are changed In this investigation I will change variables within the experiment, which will hopefully change the rate of reaction and also the deposit of copper metal at the cathode. These variables could include: �Voltage �Concentration of solution/ Quantity of Solution �Surface area/ Size of Electrodes �Temperature �Molarity/Concentration of Solution �Distance between the electrodes These variables all have a way of changing the rate of reaction. Voltage: Changing the voltage of the circuit would affect the rate of reaction because as Ohm's law states, As charged particles try to make their way round a circuit they encounter resistance to their flow which means that they collide with atoms in the conductor. More resistance means that more energy is needed to push the same number of electrons through part of the circuit. So by increasing the voltage more electrons will flow through the circuit, which means there would be a lot more electrons flowing in the circuit therefore there will be a lot more energy being produced. ...read more.

This law states that the amount of copper deposited on the cathode and lost from the anode depends on the number of electrons passing through the circuit, i.e. upon the charge passed through the power supply. The charge passed, q in Coulombs. A Coulomb is the quantity of electricity that flows when one amp is allowed to flow for one secon. 96,500 Coloumbs is 1 faraday which is one mole of electricity. Is related to the current, I (in amps) and time, t (in seconds). The formula is, q = It From this equation I would be able to predict the results I will be getting from my investigation. As the time for this experiment is constant, then as the current flowing round the circuit is increased, then the charge passed will increase, and therefore more copper will be deposited on the cathode, and more copper will be lost at the anode. Method Two copper electrodes will be chosen so that they had the same approximate surface area and length. One of these electrodes will be chosen as the cathode being negatively charged, and one the anode being positively charged. The anode will then to be weighed, and the mass noted. The circuit will then be set up as shown below. My apparatus will consist of: �Two Copper Electrodes (Anode(+)Cathode(-) ) �Beaker �Ammeter �Copper Sulphate Solution �Battery Power Pack �Crocodile Clips �Circuit Wires �Stopclock �Scales The power supply will be set to different volt settings in my experiment first at 2 volts, then 4, then 6, then8 then 12. I will then switch on the power supply for five minutes at two volts. ...read more.