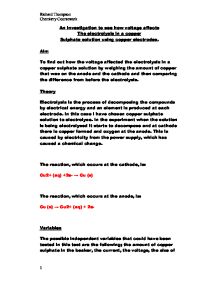 An investigation to see how voltage affects The electrolysis in a copper Sulphate solution using copper electrodes.

An investigation to see how voltage affects The electrolysis in a copper Sulphate solution using copper electrodes. Aim To find out how the voltage affected the electrolysis in a copper sulphate solution by weighing the amount of copper that was on the anode and the cathode and then comparing the difference from before the electrolysis. Theory Electrolysis is the process of decomposing the compounds by electrical energy and an element is produced at each electrode. In this case I have chosen copper sulphate solution to electrolyse. In the experiment when the solution is being electrolysed it starts to decompose and at cathode there is copper formed and oxygen at the anode. This is caused by electricity from the power supply, which has caused a chemical change. The reaction, which occurs at the cathode, is: Cu2+ (aq) +2e- � Cu (s) The reaction, which occurs at the anode, is: Cu (s) � Cu2+ (aq) + 2e- Variables The possible independent variables that could have been tested in this test are the following; the amount of copper sulphate in the beaker, the current, the voltage, the size of anode and cathode, the duration of time given for it to electrolyse and the distance between the anode and the cathode whilst inside the electrolyte In this test we have decided to set the voltage as our independent variable. ...read more.

I believe this to be because of carelessness while weighing the anode and cathode as copper shards fell off the cathode. While trying to put the electrodes back into the cardboard we were unable to keep them the same distance apart due to the electrodes becoming more and more bent. The apparatus, such as the voltmeter, which is quite old and also may not be perfectly calibrated, could have caused other errors. Also the scales, which only show the mass to 2 decimal places, could have caused problems the rest of the digits in the weight are cut off with out rounding. Therefore this experiment could have been made more accurate by using lower current values, with the same size and separation of electrodes, controlling the voltage so that the temperature is constant, and using a more accurate voltmeter and a balance which rounds the other decimal places. I could have conducted the experiment differently by letting the copper dry naturally this will have prevented accidentally dropping the copper, which will have caused an error in measuring the weight. I could also look further in to this type of test by seeing if temperature of the solution could affect it. This may give me evidence that the temperature also affects the weight. I would keep the voltage at a fixed 8 volts then try heating the solution at 10-Celsius intervals. Then I could conduct the experiment the same as the one I have just done. Richard Thompson Chemistry Coursework 1 ...read more.

This is a good experiment write-up. It has produced a good set of results and given valid reasons why the method was 'careless'. The evaluation was well done and gave excellent suggestions on altering it for next time. 4 Stars.