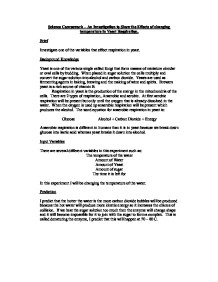 An Investigation to Show the Effects of changing temperature in Yeast Respiration.

Science Coursework - An Investigation to Show the Effects of changing temperature in Yeast Respiration. Brief Investigate one of the variables that effect respiration in yeast. Background Knowledge Yeast is one of the various single celled fungi that form masses of miniature circular or oval cells by budding. When placed in sugar solution the cells multiply and convert the sugar solution into alcohol and carbon dioxide. Yeasts are used as fermenting agents in baking, brewing and the making of wine and spirits. Brewers yeast is a rich source of vitamin B. Respiration in yeast is the production of the energy in the mitochondria of the cells. There are 2 types of respiration, Anaerobic and aerobic. At first aerobic respiration will be present but only until the oxygen that is already dissolved in the water. When the oxygen is used up anaerobic respiration will be present which produces the alcohol. The word equation for anaerobic respiration in yeast is: Glucose Alcohol + Carbon Dioxide + Energy Anaerobic respiration is different in humans than it is in yeast because we break down glucose into lactic acid whereas yeast breaks it down into alcohol. ...read more.

water the same throughout the investigation * Let the solution stand for the same amount of time each time, five minutes * Add the yeast only when the sugar solution is at the correct temperature Safety This investigation isn't very dangerous; I will only have to be careful when handling the hot water. Analysis From my results you can see that the yeast reacts better between 35-50 C. This is because at 20 C the water was too cold to give the enzyme any energy. At 65 C there was not much reaction, I recorded an average of 2.5 bubbles of carbon dioxide. This was because the water was too hot and when the water is too hot the enzyme deforms and changes shape as shown in my prediction diagram. It gave off a few carbon dioxide bubbles at the beginning before it changed shape so maybe at 50 - 60 C the yeast will react better as it didn't change shape straight away. At 80 C the water was far too hot, this would have changed the shape of the yeast straight away. ...read more.

I had to wait for it to start to respire, but this was the case in all the tests so in a way it was fair. Accuracy of Measurements All of my measurements were accurate. This was because I used an electronic set of scales to weigh the yeast and the sugar. Another reason why my test was accurate was that we used a thermometer to check the temperature that is an accurate means of measuring heat. It would have been even more accurate if we used an electronic thermometer. Improvements to Plan The only major improvement that I think would have been useful would be to increase the temperature by only 5 C each time instead of 15 C. This would help us to get a more accurate measurement of when the yeast respires best. If I had more time I would have done this and would have been able to find the optimum temperature for the yeast. Another improvement would have been to measure the amount of carbon dioxide given off instead of counting the bubbles. This would have been a good improvement as bubble sizes change, they are never the same size. ...read more.