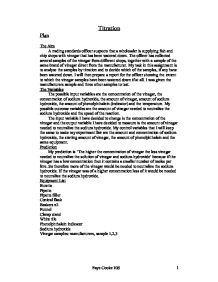 Analyse the samples by titration and to decide which of the samples, if any have been watered down.

10. Stop when the indicator has changed the solution from purple to clear and note the reading on the burette. 11. Empty and rinse the conical flask and then refill and zero the burette. 12. Using the pipette filler, refill the pipette and let the solution out until the meniscus is on the line. 13. Repeat steps 5, 6 and 7. 14. Repeat step 8 but stop about 1cm before the previously recorded volume. Then add the vinegar drop by drop until the solution goes clear. 15. Record the volume added in a table. 16. Do at least three readings within 0.1 cm of each other for each sample. Scientific Knowledge Equation for the reaction: Acid + Alkali --> Salt + Water Sodium Hydroxide + Ethanoic Acid --> Sodium Ethanoate + Water NaOH + CH3COOH --> CH3COONa + H2O 1 Mole + 1 Mole --> 1 Mole + 1 Mole I know that it takes 1 mole of NaOH to neutralize 1 mole of CH3COOH and then you get 1 mole of CH3COONa and 1 mole of H20 amount of moles = concentration x volume a = cv = 0.1 x 25/1000 = 0.0025 moles of NaOH 0.0025 moles of sodium hydroxide and Ethanoic acid are needed each time. ...read more.

As the volume halves the concentration doubles, for example on my graph the volume is 26 cm and the concentration is 0.10 moles and when the volume is 13cm ,the concentration is 0.20 moles. On the second graph I plotted the axis was volume of vinegar against 1/concentration of vinegar. In this graph I have found that all the points join up to become a straight line. I have found that sample 1, 2 and 3 have been watered down because the concentration for those three samples is lower than the concentration of the manufacturers sample. Evaluation In my experiment I have completed it fairly, the equipment I used to make it fair was the same volume pipette and burette. This is because they have a line on them and the meniscus of the liquid is on the line so I will be using the same volume of liquid every time. On my first graph the first three points are joined up by more of a straight line than the curve that joins the 3rd and 4th points up. To make this more of a smooth curve I could have missed a point out of it to make it smooth. I have enough results to support my conclusion because every result I took was within 0.1 cm of each other. To further my experiment I could react all of the samples with magnesium and then the less concentrated vinegars will react slower. 1 Faye Cooke 10S ...read more.