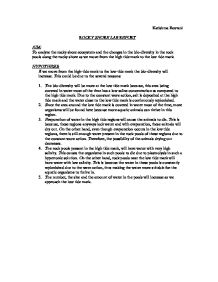 Karishma Rawtani ROCKY SHORE LAB REPORT AIM: To analyze the rocky shore ecosystem and the changes in the bio-diversity in the rock pools along the rocky shore as we move from the high tide mark to the low tide mark. HYPOTHESIS: If we move from the high-tide mark to the low-tide mark the bio-diversity will increase. This could be due to the several reasons: 1. The bio-diversity will be more at the low tide mark because, this area being covered in water most of the time has a low saline concentration as compared to the high tide mark. Due to the constant wave action, salt is deposited at the high tide mark and the water close to the low tide mark is continuously replenished. 2. Since the area around the low tide mark is covered in water most of the time, more organisms will be found here because more aquatic animals can thrive in this region. 3. Evaporation of water in the high tide regions will cause the animals to die. This is because, these regions anyways lack water and with evaporation, these animals will dry out. On the other hand, even though evaporation occurs in the low tide regions, there is still enough water present in the rock pools of these regions due to the constant wave action. Therefore, the possibility of the animals drying out decreases. 4. The rock pools present in the high tide mark, will have water with very high salinity. This causes the organisms in such pools to die due to plasmolysis in such a hypertonic solution. On the other hand, rock pools near the low tide mark will have water with low salinity. This is because the water in these pools is constantly replenished due to the wave action, thus making the water more suitable for the aquatic organisms to thrive in. 5. The number, the size and the amount of water in the pools will increase as we approach the low tide mark. ...read more.

Emerging more than 520 million years ago, there are around 1,220 barnacle species currently known. Barnacles spend their early life as part of the plankton, floating wherever the wind, waves and tides send them, surrounded in a bivalve shell. They then settle down in an area where environmental signals indicate, is a safe and productive region. They stick their legs in the air, and develop six hard plates to surround their body and for the rest of their lives, they are cemented to the ground, using the feathery legs called cirri, to capture passing planktons. 5. CRABS: Crabs, also known as decapods, are in the Crustacean family, characterized by the crab's hard shell (carapace). Crabs have 4 antennae, 2 claws, 4 visible ambulatory legs, and 4 small legs kept inside the shell. The antennae are used for sensing. The crab's larger claw is mainly used for defense, and the smaller claw is used for climbing and carrying food in the mouth. The 4 visible legs are used for walking and climbing, and the other 4 legs are kept inside the shell and are used to hold on to and maneuver the shell and for removing sand and waste. If any of the crab's legs have broken off, they will regenerate when the crab molts. Smaller crabs live in the pools on the lower shore and the larger ones are found out in deeper water. Aquatic crabs can live out of water for a little while (which explains why they are sometimes found washed up on the sand), but they need an aquatic environment to survive. 6. SPONGE: Sponges are a diverse group of organisms, with about 5000 species known across the world. They are primarily marine, but around 150 species live in fresh water. Sponges have cellular-level organization i.e. their cells are specialized such that different cells perform different functions, but similar cells are not organized into tissues, and the body of the sponge is a sort of loose aggregation of different kinds of cells. ...read more.

> The hypothesis was not aptly proved because of the fault in the results and due to the several other limitations as mentioned below: {Limitations faced at the site} 1. Due to the time constraint, it wasn't possible to observe their pools in greater depth, thereby not being able to count some organisms. 2. The pools allotted to each group weren't of the same size, as the result of which some hidden organisms mustn't have been counted accurately e.g. due to the big size of the pool, group 6 couldn't get into their pools and count some of the organisms. 3. It is possible that due to the agile nature of some of the organisms, some of them must have been counted more than once. 4. Some species were well hidden underneath the rocks and in order not to harm their habitat they couldn't be counted. 5. Some species being hidden in the sand couldn't be counted. 6. Due to the presence of salts and wastes, the saline concentration of the pools was high, resulting in the death of some of the organisms due to plasmolysis and hence they couldn't be counted. Possible solutions to the limitations: {to minimize the errors} 1. More time could have spent in observing the pools so that a more conclusive result could have been found. Also the rocky shore could have been analyzed in a different season so that the results could be compared and a better analysis could be obtained. 2. By choosing a rock pool of more or less the same size, uniform results would have been obtained because people working on the bigger pools would be able to work on the smaller pools and obtain a better result. 3. Measures should have been taken to count the animals hiding beneath the rocks without harming them, so that our findings would be more conclusive. 4. Measures should have been taken so that the species wouldn't have been counted again. This could have been done by marking them, so that if they were caught again, they could have marked out. 5. ...read more.