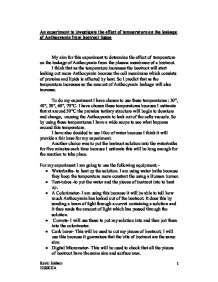 An experiment to investigate the effect of temperature on the leakage of Anthocyanin from beetroot tissue My aim for this experiment to determine the effect of temperature on the leakage of Anthocyanin from the plasma membrane of a beetroot. I think that as the temperature increases the beetroot will start leaking out more Anthocyanin because the cell membrane which consists of proteins and lipids is affected by heat. So I predict that as the temperature increases so the amount of Anthocyanin leakage will also increase. To do my experiment I have chosen to use these temperatures: 30�, 40�, 50�, 60�, 70�C. I have chosen these temperatures because I estimate that at around 50�C the proteins tertiary structure will begin to denature and change, causing the Anthocyanin to leak out of the cells vacuole. So by using these temperatures I have a wide scope to see what happens around this temperature. I have also decided to use 10cc of water because I think it will provide a fair base for my experiment. Another choice was to put the beetroot solution into the waterbaths for five minutes each time because I estimate this will be long enough for the reaction to take place. For my experiment I am going to use the following equipment;- * Waterbaths- to heat up the solution. I am using water baths because they keep the temperature more constant the using a Bunsen burner. ...read more.

Because I was only using tap water it is possible that it all ready contain some pollution so my results could be slightly off by 1 or 2% but by using distilled water (which is 100% pure) I might have got slightly different results. Another limitation was the fact that all beetroots are different by having different genetic make-ups; if I were to repeat this experiment it might have different results because the new beetroot would have a different genetic make-up to the one I had just used so it would have a different amount of leakage. A possible limitation is that the colorimeter isn't always 100% accurate so sometimes you can results which fluctuate 1 or 2%. A few problems I did have with my experiment were making sure all the beetroot pieces were the same mass, surface area etc, I did try to keep the beetroot pieces identical to each other but it was impossible to get it exact. Another problem was that the water baths were constantly changing 1-2�C so a few of my results may have been performed in slightly changing temperatures. This was a bit of a problem because a few of my experiments could have been preformed at 38�C and another might have been at 40�C which could cause different results. If I was to repeat this experiment again I might expand it slightly by using different plants as well to get a wider view of how heat affects cell membranes. ...read more.