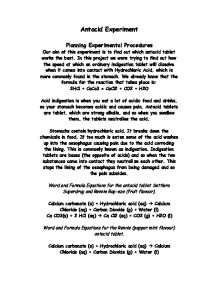 The next stage is to divide the answer with the concentration of the hydrochloric acid, mine was one molar and so we did not have to go through this final stage. The answer that you get will be in dm-cubed, to convert it to cm-cubed we simply multiply it by one thousand. I will show you how I found out how much hydrochloric acid it took to neutralise the superdrug tablet, as an example. The RFM for calcium carbonate=40+12+16+16+16=100 0.5(Mass)/100(RFM)=0.005 0.005*2=0.01dm-cubed =10cm-cubed So my prediction is that Rennies indigestion tablet works the best, than Bisodol, superdrug and settlers are equally good, and boots indigestion tablets work the worst out of the five. There will be a reaction between the acid and the indigestion tablet because indigestion tablets are designed to neutralise stomach acid. The hydrochloric acid that I am using is very similar to the acid that is in the stomach. Carbonates all react with acids to give off carbon dioxide, With an acid to produce a salt + water + carbon dioxide. The formula for the reaction of Calcium Carbonate and Magnesium Carbonate are the similar. This is shown below. Calcium + hydrochloric = calcium + water + carbon this writing Carbonate acid chloride dioxide CaCO3 + 2HCl = CaCl2 + H2O + CO2 Hydrochloric Acid + Magnesium = Magnesium + water + carbon Carbonate chloride dioxide Sodium bicarbonate is also know as sodium hydro carbonate Sodium hydro carbonate is used in baking. The carbon dioxide gas it gives off when heated makes dough rise. It is also used as an antacid to relieve indigestion Therefore, as the sodium bicarbonate is warmed by being in hot acid it could break down into sodium carbonate, water and carbon dioxide. This carbon dioxide will add to the volume of gas being produced. 2NaHCO3 = Na2CO3 + H2O + CO2 This sodium carbonate would then react with the acid to form sodium chloride, water and carbon dioxide. ...read more.

We were shown the same experiment but by using more accurate equipment. A magnetic stirrer was used and also a tablet was put in to automatically tell us the ph of the solution, this was all wired up to a computer, where it displayed the information on the screen, by using data logging. I think that if we had the magnetic stirrer and the data logging system, than our results would be a lot more accurate and may match my predictions made. The case could also be solved just by simply doing the same experiment a few more times, to get more results because with only three results you do not know if you have an anomalous result unless one result is completely different to the other two. The evidence is not strong enough to support a firm conclusion because we have just not got enough but I can tell you that Rennies is the best indigestion tablet. I found throughout the experiment and through my results that my experiment must have been conducted well and to such an extent of fairness to get results as close as the predictions. Although this may be the case but it can always be able to be improved. The accuracy I feel was sufficient because I have spent time on taking down results and observating things when appropriate. This suggests this will be very hard to improve this an only way is to spend even more time observating the results but this may effect the experiment. As you can see in the above results table there are not many anomalous results again therefore suggesting that my experiment was a success and very fair. I could have improved this test by using a pH probe and a computer program to see when it has exactly reached the pH 1 which would make the test very fair. Also I could have repeated it with a wider range of tablets, which may have gave us a wider range in results to compare. HAMMAD NAVEED 10B ...read more.