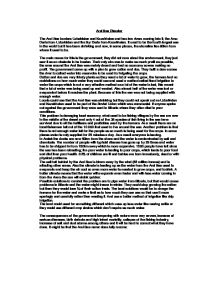 Aral Sea Disaster The Aral Sea borders Uzbekistan and Kazakhstan and has two rivers running into it, the Amu Daria from

Aral Sea Disaster The Aral Sea borders Uzbekistan and Kazakhstan and has two rivers running into it, the Amu Daria from Uzbekistan and the Syr Daria from Kazakhstan. It used to be the fourth largest sea in the world but it has been shrinking and now, in some places, the shoreline lies 80km from where it used to be. The main cause for this is the government; they did not care about the environment, they just saw it as an obstacle to be beaten. Their only aim was to make as much profit as possible, the area around the Aral Sea was mainly desert and had no economy so was making no profit. The government came up with a plan to grow cotton and rice. They built a dam across the river to collect water into reservoirs to be used for irrigating the crops. ...read more.

This problem is damaging local economy, what used to be fishing villages by the sea are now in the middle of the desert and only 4 out of the 38 species of fish living in the sea have survived due to all the fertilisers and pesticides used by the farmers. As a result there are no local fishermen left out of the 10 000 that used to live around the sea. Another problem is that there is not enough water left for the people as so much is being used for the crops. In some places water is only supplied for 25 minutes a day. As a result everyone is leaving. In Aralsk the docks are now 50km from the shore and the water is contaminated by salt and chemicals. ...read more.

They could stop growing the cotton but then they would lose 3/4 of their cotton trade. The best solutions would be to charge the farmers for the water and make a limit as to how much they can use so that use it more sparingly and carefully rather than wasting it. And use a better method of irrigation like drip irrigation. The land could used for something different which uses up less water like rearing cattle or they could use different crop strains which don't require as much water. The consequences of the government tampering with nature were very severe, increase of serious diseases, birth defects and high infant mortality, collapse of the fishing industry, increase of salt and dust storms among others and it will be hard to correct what they have done. It might be that the Aral Sea never does fully recover. ...read more.