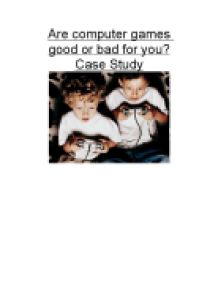 Are computer games good or bad for you?

In may 2009 a boy in bangkok of the age of 12 years old took his own life by jumping off his schools 6 story high veranda,what could possible drive a boy of so young to take his own life?, a ban form his parents on him playing computer games,that?s what. Researchers at theUniversity of Rochester and Immersyve, Inc. investigated what motivates gamers to continue playing video games. According to lead investigator Richard Ryan, they believe that players play for more reasons than fun alone.Richard Ryan, a "motivational psychologist" at Rochester, says ?many video games satisfy basic psychological needs, and players often continue to play because of rewards, freedom, and a connection with other players?(1) further more, one of the many reasons why gamers choose to play these addictive games is because there stressed,something?s streesed them during the day and they need an aid to help calm them down,there answer is computer games,with games like sims 2 where the objective is to raise a family and build an emipre the player feels relaxed and happy this is triggered by a chemical called serotonin,a chemical relseased by the brain to make you feel happy. In conclusion,after playing these games for more then ten minues and having high levels of serotoning flowing through the body the gamer gets distracts,pulled in and basically hypertisted by this wonderfull world,this all resulting in,not doing improtant things such homework,instrument practise,sorting out family birthdays and shocking enough,in some server case,not even eating,drink or sleeping. ...read more.

an amazing thing, that will help massively in later life and the only place I know that trains brains is games, games that can be bought cheaply, played with family and friends and widens your knowledge and abilities. Finally, the eyes, second to the brain in the part of the body that?s confuses and amazes scientists the most but yet, a simple game like call of duty 4 or doom 3 can teach the eyes to pick up certain shades like grey and green and also to capture quick moving objects before it?s to late this, if in the army, can be thing that allows you to shot the enemy be for he shots you. In conclusion, in this report I have put out a balanced argument to my question, are computer games good or bad for you?, uncovered research to those burning questions and have given my points and views, I personally believe the government should be doing more to tackle the problems such as game violence, higher age rating and hard penalties to kid caught on ages above there age limit, addiction, the government should make the problem of addiction more public so put information on the side of games and consoles warning people, and finally, health problems the government should be co-operating with the gaming industries so they could involve more movement of the player and the also with the sports industries so they can do things like put local sports club information onto consoles. ...read more.