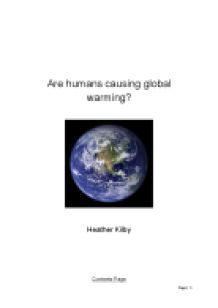 ï»¿Are humans causing global warming? Heather Kilby Contents Page 1. Title 2. Contents 3. What is global warming 4. Arguments for, first piece 5. Arguments for, second piece 6. Arguments against, first piece 7. Arguments against, second piece 8. Comparing the arguments 9. Comparing the arguments 10. Bibliography Global Warming Global warming refers to the rising average temperature of the earth’s atmosphere which in turn causes a change in climate; we can prove this as in the last 100 years the earth’s average surface temperature has increase by about 0.8Ëc with about two thirds of the increase occurring over just the last three decades. For decades scientists have been trying to figure out what is causing global warming, they have looked at natural cycles and events that are known to alter climate. But the amount and pattern of global warming can’t be explained by these factors alone. The only way to explain the pattern is to include the effect of greenhouse gases emitted by humans. The greenhouse effect is the warming that happens when certain gases in the earth’s atmosphere trap heat. Sunlight shines onto the earth’s surface, where it is absorbed and then radiates back into the atmosphere as heat, the rest escapes into space. The more greenhouse gases are in the atmosphere the more the heat gets trapped. The greenhouse effect is what makes the earth’s climate livable, without it the earth earth’s surface would be about 15Ëc cooler. However if the greenhouse effect continues to increase then consequences will follow. Some of the impacts of rising temperatures have already taken place; 1. ...read more.

This supports the statement humans are not causing global warming because, it says that the earth is on a warming part of a cycle and soon it will cool down again and that there is no evidence that the greenhouse effect is taking place. The second piece was an article that tried to show that global warming was a natural occurring weather type and not influenced by humans, it also mentioned that in the past there has been increases of temperatures which were not linked to greenhouse effect. This supports the argument that humans are not causing global warming because it uses data and evidence that shows global warming has happens before when humans were not around, so it can?t be caused by humans. As for the best quality evidence, both sides has useful information, however I believe the evidence which is for humans causing global warming provides stronger evidence. I think this because each article has very strong facts that are more useful. The graph was the most useful piece of evidence, with the comparison of has much carbon dioxide we emit and how much overall. The other side also had some good evidence but it wasn?t as relevant. After researching each side of the argument in great detail I have come to the conclusion that humans are causing global warming. I feel this for a number of different reasons, one being that the information was much more useful and reliable, also that the graph clearly displayed that humans were causing global warming. The second piece of evidence also helped me make my decision as it showed how we need fossil fuels for everything and so we were them so much, that an incredible amount of carbon dioxide was being produced. ...read more.