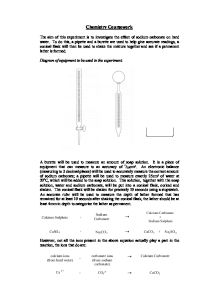 AS Chemistry - Investigate the effect of sodium carbonate on hard water

Chemistry Coursework The aim of this experiment is to investigate the effect of sodium carbonate on hard water. To do this, a pipette and a burette are used to help give accurate readings, a conical flask will then be used to shake the mixture together and see if a permanent lather is formed. Diagram of equipment to be used in the experiment: A burette will be used to measure an amount of soap solution. It is a piece of equipment that can measure to an accuracy of 1/20cm�. An electronic balance (measuring to 3 decimal places) will be used to accurately measure the correct amount of sodium carbonate; a pipette will be used to measure exactly 25cm� of water at 20oC, which will be added to the soap solution. This solution, together with the soap solution, water and sodium carbonate, will be put into a conical flask, corked and shaken. The conical flask will be shaken for precisely 10 seconds using a stopwatch. An accurate ruler will be used to measure the depth of lather formed that has remained for at least 10 seconds after shaking the conical flask, the lather should be at least 4mm in depth to categorise the lather as permanent. However, not all the ions present in the above equation actually play a part in the reaction, the ions that do are: The soap solution is used to find out the hardness of the water being tested. The equation below shows what happens when soap is added to water. ...read more.

Firstly, every time new amounts of water are taken, they must be from the same source and of the same amount as it is a controlled amount each time. Secondly, the soap solution should be from the same bottle each time more amounts of it are added. Once again, this applies to the sodium carbonate, which must also be pure. The amount of sodium carbonate is varied and as a result the amount of soap solution used varies. The time taken to shake the solution should be a fixed time of 10 seconds using a stopwatch in order to produce accurate results. The laboratory used to carry out the experiment should be kept at exactly the same temperature all the time; this temperature should be "room temperature" (21�C). The control, to which all results are compared, is varied and the differing results are analysed in a table of results. Much preliminary work has been done to help make a prediction. The preliminary work was as follows: 1. Fill a pipette with 25cm� of water using a pipette filler. 2. Empty contents of pipette into a conical flask. 3. Add 0.5g of sodium carbonate to the conical flask containing water. 4. Put the cork in the conical flask and shake thoroughly to dissolve sodium carbonate (using a filter to remove any excess). 5. To titrate, fill a burette with soap solution to the zero mark. Dispense 1cm� of soap solution into the conical flask. 6. Replace the cork in the flask and shake for 10 seconds; observe if a permanent lather forms i.e. one that lasts more that 10 seconds. ...read more.

This is because more repeats could have been carried out than just three times. Another reason is that the experiment was split up into two parts, the first time I used an accurate stopwatch and the second time I used a wall clock. The experiment could also have been carried on further to see how the results would have become after much more sodium carbonate was added. To improve this experiment we could have used a thermometer to make sure the temperature was the same each time. Another way of making sure the temperature was the same both times is to take all the water necessary for the whole experiment and store it in large container at exactly the same temperature for the whole course of the experiment and in the gap between both halves of the experiment. To improve the accuracy of the timing we could have used a stopwatch both times. To make sure the water had not been contaminated from the ring main system we could have taken the water from a place before it had been put in to the ring main system to give a true reading of the hardness of water in London. To extend the work to support my conclusion two different experiments could be carried out. Firstly, we could try the experiment with different temperatures of water to see what affect the change in temperature had on my results. Secondly, different samples of water can be taken from different areas. For example, samples could be taken from all over the country or even the world. This would show us the different hardness's of water across the globe. ?? ?? ?? ?? Analysis Evaluation Gidon Mahalla ...read more.