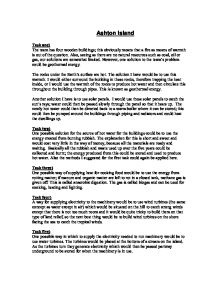 Ashton Island Task one) The team has four wooden buildings; this obviously means that a fire as means of warmth is out of the question. Also, seeing as there are no natural resources such as coal, oil or gas, our solutions are somewhat limited. However, one solution to the team's problem could be geothermal energy. The rocks under the Earth's surface are hot. The solution I have would be to use this warmth. I would either surround the building in these rocks, therefore trapping the heat inside, or I would use the warmth of the rocks to produce hot water and then circulate this throughout the building through pipes. This is known as geothermal energy. Another solution I have is to use solar panels. I would use these solar panels to catch the sun's rays; water could then be passed slowly through the panel so that it heats up. The newly hot water could then be directed back to a warm boiler where it can be stored; this could then be pumped around the buildings through piping and radiators and could heat the dwellings up. ...read more.

The gas is called biogas and can be used for cooking, heating and lighting. Task four) A way for supplying electricity to the machinery would be to use wind turbines (the same concept as water except in air) which would be situated on the hill to catch strong winds except that there is not too much room and it would be quite tricky to build them on that type of land relief, so the next best thing would be to build wind turbines on the shore facing the sea to catch the tropical winds. Task five) One possible way in which to supply the electricity needed to run machinery would be to use water turbines. The turbines would be placed at the bottom of a stream on the island. As the turbines turn they generate electricity which would then be passed partway underground to be stored for when the machinery is in use. ...read more.

Water turbine - because it is close to the camp and it's the nearest stream. Task eight) For most of my solutions to the problems that have been addressed, I have used natural resources. For instance, the use of rotting matter and the waste and rubbish of the team generally would not need to be paid for, because the waste is just going to be thrown away any way, so it is no inconvenience to anyone to use it to produce energy. However things such as the solar panels and the windmills would need to be paid for somehow. Solar panels at their best can cost up to �500.00 each and therefore could cost a large amount. Windmills as a whole can cost around �50,000.00 and if we are trying to make a lot of watts then it is going to mean additional costs. As for the water turbines and the geothermal energy it is not a matter of leaving them to their own devises, the need to be maintained and to be placed there with caution so they don't get damaged. ...read more.