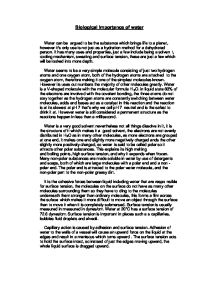 Biological importance of water Water can be argued to be the substance which brings life to a planet, however it's only use is not just as a hydration method for a dehydrated person. It has many uses and properties, just a few include being a solvent, cooling mechanism, sweating and surface tension, these are just a few which will be looked into more depth. Water seems to be a very simple molecule consisting of just two hydrogen atoms and one oxygen atom, both of the hydrogen atoms are attached to the oxygen atom, therefore making it one of the simplest molecules known. However its uses out numbers the majority of other molecules greatly. Water is a V-shaped molecule with the molecular formula H2O. ...read more.

This explains its high melting and boiling points, high surface tension, and why it expands when frozen. Many non-polar substances are made soluble in water by use of detergents and soaps, both of which are large molecules with a polar end and a non-polar end. The polar end is attracted to the polar water molecule, and the non-polar part to the non-polar greasy dirt. It is the cohesive forces between liquid including water that are responsible for surface tension, the molecules on the surface do not have as many other molecules surrounding them so they have to cling to the molecules underneath them stronger than ordinary molecules, this forms a film across the suface which makes it more difficult to move an object through the surface than to move it when it is completely submersed. ...read more.

It is necessary for all digestive, absorption, circulatory, and excretory functions, it also helps in functiuon of water soluble vitamins and maintaining a steady body temperature. As water can be a fluid it exerts a static fluid pressure, The pressure exerted by a static fluid depends only upon the depth of the fluid, the density of the fluid, and the acceleration of gravity. If two solutions of different concentration are separated by a semi-permeable membrane which is permeable to to the smaller solvent molecules but not to the larger solute molecules, then the solvent will tend to diffuse across the membrane from the less concentrated to the more concentrated solution. This process is called osmosis. Osmosis is of great importance in biological processes where the solvent is water. The transport of water and other molecules across biological membranes is essential to many processes in living organisms. The energy, which drives the process, is usually discussed in terms of osmotic pressure. ...read more.